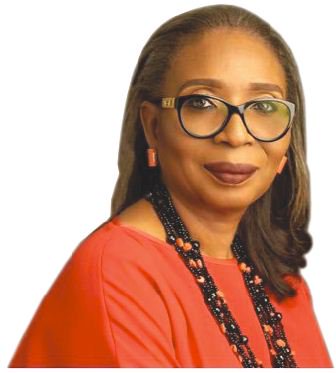 The most successful entrepreneurs in Nigeria and Africa would be incomplete without mentioning business mogul, Ibukun Awosika.

Awosika who also doubles as a motivational speaker and an author is a force to be reckoned with.

Here’s everything you should know about her as she turns a year older.

Ibukun Abiodun Awosika was born on the 24th of December, 1962 in Ibadan, Oyo State, Nigeria. She is the third of seven children. She had her primary and secondary education at St. Pauls African Church Primary School, Lagos and went on to Methodist Girl’s High School, Yaba. She graduated from the University of Ife (now known as Obafemi Awolowo University) with a degree in Chemistry.

While on her compulsory one-year National Youth Service Corps Service, Ibukun worked as an audit trainee at Akintola Williams & Co. Although she had started ICAN exams, Ibukun gave up her ambition to become an accountant because she felt the life of an auditor did not allow much room for creativity and use of initiative.

As a result of her love for architecture, she got a job at Albert Nigeria Ltd. as a showroom manager.

In her quest to be independent, she established a furniture manufacturing company called Quebees Limited in 1989. Her first upholstery was for the family of a friend of her youngest sister. The job was done at the back of her house then at Aguda, using her mother’s sewing machine.

She sits on the boards of Cadbury Nigeria Plc., Digital Jewel Limited, and Convention on Business Integrity (CBI). She was Chairman, FBN Life Assurance Limited, FBN Capital Limited, and Kakawa Discount House Limited. She also served on the board of Nigerian Sovereign Investment Authority (NSIA).

A fellow of the African Leadership Initiative and Aspen Global Leadership Network, Ibukun is a member of the Nigerian Economic Summit Group, member of the board of Nigerian Sovereign Wealth Fund and Chairman, Board of Trustees of Women in Management, Business and Public Service. In 2011, she co-founded the Afterschool Graduate Development Centre, a career center established in order to checkmate the high rate of unemployment in Nigeria.

On September 7, 2015, Ibukun became the first woman to be appointed Chairman of First Bank of Nigeria following the resignation of Prince Ajibola Afonja. With a high interest in social issues including women, Ibukun is a co-founder and past chairperson of Women in Business, Management, and Public Service (WIMBIZ).

She is an ordained Pastor and founder of the Christian Missionary Fund, a faith-based organization that works with hundreds of missionaries spread across Nigeria to change lives through the provision of medical, educational, and other supplies.

Ibukun Awosika is married to Abiodun Awosika and they’re blessed with three wonderful sons. Her birthday also coincides with her wedding anniversary so its a double celebration.

Ibukun Awosika is one of the most influential Nigerian entrepreneurs with an estimated net worth of $18.6 million.