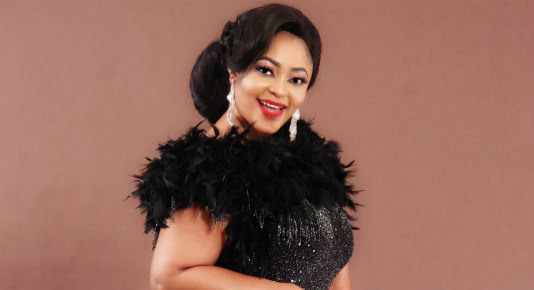 Biodun Okeowo aka Omo Butty is a Nollywood Yoruba actress and producer popularly known for her voluptuous figure and style.

As she turns a year older, here are some facts about her.

1. Biodun Okeowo was born Abiodun Sofuyi Okeowo on December 26, 1971. She grew up in Fadeyi area of Lagos.

2. She is an indigene of Remo in Ogun State. Her father was an actor with the Awarawa Theatre Group with Jide Kosoko.

3. She is from a polygamous family and the last of her mother’s five children.

4. She is a graduate of Communications Arts from Lagos State University(LASU).

5. She interned at Lagos State Television (LTV8) and this, in turn, led to her passion for acting. 6. She started her acting career in 2006 under the tutelage of Ray Eyiwunmi.

7. Her first movie role was in ‘Eniyemi’ but the movie that brought her to limelight was ‘Tolani Osinrin’ in 2007.

8. She got the name ‘Omo Butty’ from her self produced movie. She has gone on to produce other movies like Folashade, Are, Aturota, etc

9. She once revealed she did menial jobs like selling chinchin and doughnuts shortly after she gave birth to her first child as a student at Lagos State University.

10. She was awarded the Movie personality of the year 2010 at the Global Excellence Awards.

11. She became a vegetarian so as not to lose her figure-eight shape.

12. She once claimed to have gotten married as a virgin.

13. She launched her beauty business, Victoria Beauty Palace in 2015.

14. She is separated from her husband but has two children, a boy, and a girl. In an interview with BroadTV in August 2019, she claimed not to have been married to her ex-husband.