Worse State Of Popular Ilesa Stadium, And Its Effects On Osun Sports By Kunle Daramola 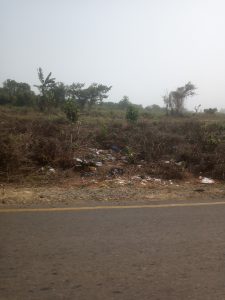 Have you been to Akwa Ibom, Uyo to be precise. Have you seen the Akpabio International stadium? Its beauty, vastness, beyond these, have you ever thought of its economical advantages, social development, and cultural exploitation?
These are the questions that ran through my mind when I saw the ‘remains’ of Ilesa Stadium. Yes, I agree with you, that unlike Uyo, Ilesa is not the capital of its state. To be sincere, i agree that Osun state is not as rich as the oil generating state, Akwa Ibom.
But what I do not agree is that Osun state does not have the capital to fund the renovation of the completely dilapidated stadium, not only in Ilesa, but other stadiums in the state, including the capital city, Oshogbo.
Just last week, I was having a solemn conversation with my close friend, who reminded me of our desire to be world class footballers, and through this discussion, he made mention of a young player who plays for Manchester United football club in England, Lingard, who had been given few playing time but still receives 150,000 pounds a week- other allowances not included.
Well, the point was not the huge sum he is being paid but the opportunity he has gotten though he is young, and the emphasis Britain had over time paid on football.
We concluded that the problem is not lack of football talents, the bone of contention is that our government has given little or no attention to sports, especially at the grass root level. Not to collapse all the blames on the government, stakeholders, indigenes and residents of Ilesa town have been ignorant of the sports sector.
I will say it again, this town barely enjoy development of any kind, yet, hundreds of hotels and event centers have engulfed the town. Let us be critical about this issue, no notable foreign or local investment, whether in sports, media, technology or production. My people would rather procure lands for hotels and event centers. Please, what are the benefits?
During my studies in the prestigious Obafemi Awolowo University, a friend once addressed Ilesa as a town that preferred Prison to Railway system. I wanted to believe it never happened, but many sources had confirmed that my ancestors rejected the development.
However, it is a new dawn, a new era. We are in the modern world, where Ijesas in diaspora are much more than the ones at home. All thanks to underdevelopment laced with poverty.
My reason for writing this piece is to once again call on the Osun State government, the commissioner for youth and sports Mr. Lawal Azeez Olayemi, other stakeholders; business men, philanthropists, the media and all other successful Ilesa indigenes and residents to give the Ilesa Stadium the renovation needed. I believe this will make life easier for the Ilesa people, and Osun football will live to witness a great height in the Nigeria Professional Football League.

How a Ghanaian destroyed Nigeria’s embassy x     The group accused Governor Abdulrahman Abdulrazaq of running a secret government as citizens could no…
byTOPNEWS MEDIA
Loading Comments...