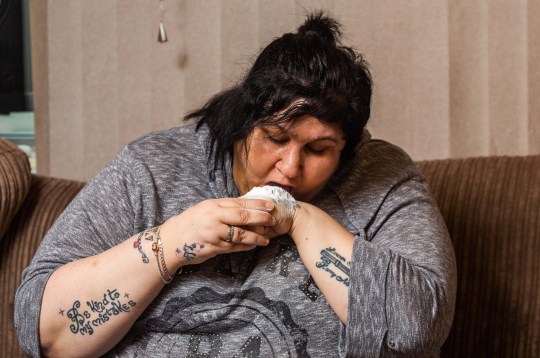 A woman has revealed her bizarre addiction to eating baby powder.

44-year-old Lisa Anderson started eating it 15 years ago after feeling the urge while drying off her son and says she can now consume a whole tub every day.

This bizarre habit has seen her spend an estimated £8,000(about N3million) on Johnson’s Baby Powder. 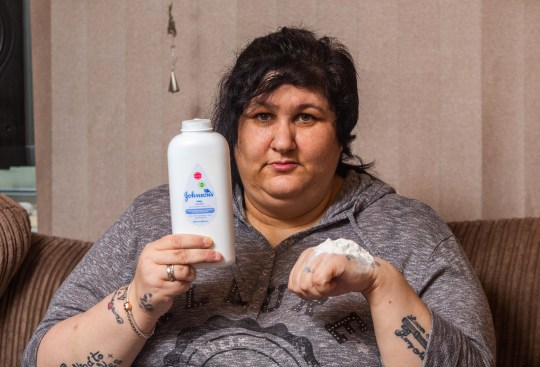 Lisa can get through a whole 200g bottle in a day and even gets up four times a night to feed her craving, which costs her £10 a week.

She kept the habit secret for a decade before confiding in her ex-partner – and has now plucked up the courage to get professional help, after saying that she would like to stop but it is ‘very, very hard’.

Lisa was recently told by doctors that she may have symptoms of PICA syndrome – an eating disorder characterised by a compulsion to eat non-food items and items with no nutritional value such as stones, sand, paint and talcum powder.

Lisa kept her condition secret for 10 years until her ex-partner stormed into the bathroom having grown suspicious of her regular visits.

She said: ‘I do get it’s a bit weird – but it just has this nice soapy taste. ‘I can get through a 200g bottle in a day but the bigger ones I get through about one-and-a-half a week. ‘I remember getting really drawn to its smell. Now I can’t do without it. ‘I go up and get some every half an hour.’

Lisa first developed symptoms of PICA in 2004, just a few days after giving birth to her fifth child.

She has been referred by her GP for counseling, due to start this month.

he habit is risking her health – talcum powder is made from a mineral called talc, made up of silicon, magnesium and oxygen. It is thought the substance is poisonous if it is inhaled or consumed.

Lisa said: ‘I sat down earlier this year and thought this just cannot be normal. ‘My partner doesn’t like me doing it because of the links it has to cancer and the impact it could be having on my health.

‘I went online and did my own bit of research then I decided to go to my GP. ‘I just want to raise awareness to others. ‘I spent years not knowing what was going on or happening.

“But it turns out it is a condition. And I just want to let others know they are not alone.”

x     The musician has been told that he can appeal the verdict.     Yahaya Sharif-Aminu,…
byTOPNEWS MEDIA