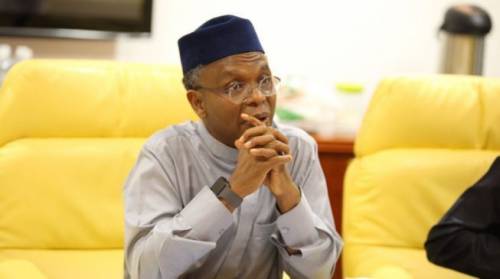 Kaduna State governor, Nasir el-Rufai, has informed critics that he will forgive them for criticising his administration.

Yesufu had quoted a 2014 tweet by el-Rufai commenting on the use of the presidential jet.

She tweeted, “Who is now breaking the implication of Buhari’s N8.5bn 2020 budget to maintain presidential fleet?

“Please tell me I am wrong about the figure!” Her post was in reference to the use of a presidential jet by Hanan, daughter of Muhammadu Buhari.

In his initial reponse, el-Rufai said he does not respond to people that don’t vote in Kaduna, adding that he is focused on governing the state rather than exchanging words with people looking for cheap publicity.

The Kaduna governor then said he will ignore and also forgive them.

“Once and final response: I do not respond to every dimwit who never voted in Kaduna State on my TL.

“I am trying to govern our state and disinterested in being a public commentator/responder to publicity/follower-seeking, anonymous and jobless clowns with neither credentials nor address.

“Afterword: The most efficient and effective way to hurt those seeking unearned attention, cheap retweets and Twitter following is to ignore them.

“Depression and sychosis set in for ignored inanities and non-entities, manifesting into anger, insults and fabrications. I will forgive you!,” el-Rufai tweeted.

How Your Favourite Celebs Turned Up For The Soundcity 2020 MVP Awards
Shocking!! Pupils Still Sit On Bare Floor In School In Oyo State(Photo)