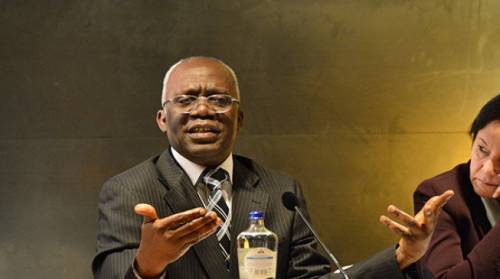 Adding his voice to the matter on Sunday, Falana said it was not allowed under Nigerian law for the president’s children to fly around in a presidential jet while on private trips.

Senior Advocate of Nigeria, Femi Falana, has said that contrary to claims by President Muhammadu Buhari’s Senior Special Assistant on Media and Publicity, Garba Shehu, the Nigerian constitution does not permit children of the president to embark on private trips using a presidential jet.

Falana was reacting to use of one of the jets in the presidential fleet by Buhari’s daughter, Hanan, for a trip to Bauchi State on Thursday.

The young lady, who holds a degree in Photography from Ravensbourne University, London, had flown into Bauchi to photograph a Durbar by Emir of Bauchi, Rilwanu Adamu, that fateful day.

The incident, which has since left many Nigerians especially social media users enraged, has remained a topical issue with some defending and condemning the move.

Adding his voice to the matter on Sunday, Falana said it was not allowed under Nigerian law for the president’s children to fly around in a presidential jet while on private trips.

According to the respected lawyer, Shehu’s defense runs contrary to the dictates of Nigeria’s constitution and therefore cannot stand.

He said, “On October 27, 2016, the Presidency confirmed newspaper reports of the planned sale of two presidential aircraft, a Falcon 7x executive jet and Hawker 4000.

“In a press statement issued by the Presidency through the President’s Senior Special Assistant on Media and Publicity, Garba Shehu, the Nigerian people were informed that President Buhari had directed that the aircraft in the presidential air fleet be reduced to cut down on waste.

“Shehu reminded Nigerians that President Buhari was elected in 2015 on a commitment to crack down on the country’s systemic corruption, hence downsizing the outlandish presidential fleet had been among his campaign pledges.

“President Buhari’s directive on the use of the presidential fleet which was adopted by the Federal Government was popularly acclaimed by Nigerians.

“However, on January 10, 2020, one of the daughters of President Buhari was reported to have travelled from Abuja to Bauchi in a presidential jet for a private engagement in utter breach of the official policy of the Federal Government.

“Instead of apologising for the breach of the official policy, the Presidency has defended the use of the presidential jet for the private visit of a member of the first family.

“The Presidency is incorrect as it is at variance with the official policy of the Federal Government.

“In other words, the official policy does not authorise the children of the President to use the presidential jets to attend to private social functions.

“In fact, there is no precedent whatsoever for such privatisation of the presidency of Nigeria.

“Using of the aircraft in the presidential fleet by members of the first family to attend to private engagements is not backed by any extant law or official policy.

“In view of the foregoing, we call on President Buhari to stop members of his family from using any of the aircraft in the presidential fleet.”