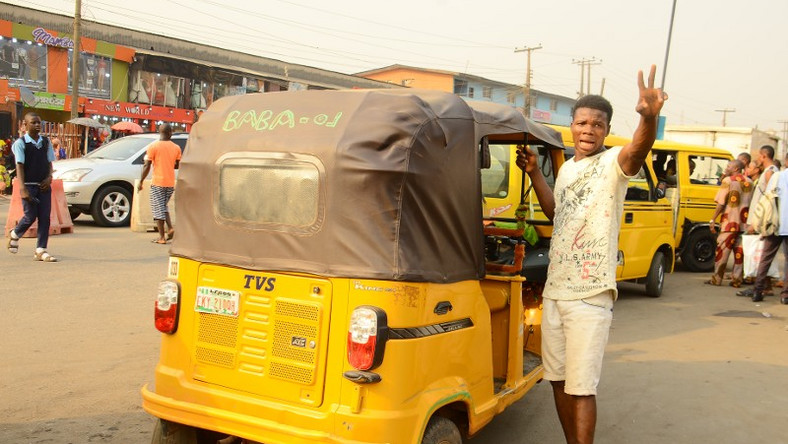 Governor Babajide Sanwo-Olu urged to regulate the transport industry in Lagos, instead of placing a ban on Okada and Keke Napep operations.

It is no longer business as usual for food vendors, alcoholic drink sellers, and other traders in Lagos, as the ban of commercial motorcycle (Okada) and tricycle (Keke Napep) took effect from Saturday, February 1, 2020.

When Topnews TV  visited some garages within the state, it was observed that the traders are experiencing low patronage, as okada and Keke Napep operators parked their tricycles and motorcycles, and sat idle.

Governor Babajide Sanwo-Olu of Lagos, has vowed to instill sanity in the operations of the Okada and Keke business. [Punch]

Recall that on Monday, January 27, 2020, the Lagos government announced a ban on the activities of Okada and Keke Napeps in some Local Government Areas like Apapa, Lagos Mainland, Surulere, Eti Osa, Lagos Island, Ikeja effective from February 1, 2020.

One middle-aged woman who identified herself as Paulina, said sales have reduced, as she lamented the low patronage since keke riders have been stopped from working.

The mother of four lamented that the riders are not only the ones affected, explaining that it may be difficult for her to fend for her family as she used to.

She said, “This Keke Napep ban has affected my sales. By now, my food would have been sold, which means I should have closed for the day already, but look at me now, I still have a lot of food yet to be sold. I have been here as early as 5:00 am, and usually, I don’t stay long long at the garage due to the patronage from riders.”

Paulina continued, “The thing has really affected my business, and I want you people to do something about it. The Napep operators are my customers, and since the ban has fully taken effect, their compliance has been disruptive to my sales.“

Similarly, Iyabo, also a food vendor, lamented the drop in sales since the ban took effect.

She said, “I sell food, and I want to plead with the government to look into our sufferings. They should leave keke to operate. This garage I sell food is not only a place of business for commercial bus drivers, keke operators also work here, and now that they have been banned, it has reduced the patronage I usually record.“

The food vendor, a mother of seven children, added that asides the drop in sales, which she is experiencing in her business, it’s difficult for her children to go to school.

“The stress cannot even be imagined. There is nothing as good as commuting to your destination with ease. We have been trekking. They should please reconsider this ban. We are not even safe again. Even after close of business for someone like me, I have to be very careful while heading home because of some dangerous people who may have resorted to crime after being thrown out of their jobs,” Iyabo added.

More so, an alcoholic drink seller who identified herself as Adejoko, said, “We can only plead with this government to spare Napep operators. They should be allowed to work. Pupils are struggling to go to school. Since they have been stopped from working, everybody is now familiar with the surge in transport fares.”

When asked about her sales, she added, “Thank God my counter is not at a garage where we only have Keke Napeps and Okadas, commercial buses also operate here. My friends who sell in places like that have been lamenting, and left with no choice than to move to other places, where they can make sales.”

While traders are lamenting low patronage, keke operators are keenly seeking to be considered to recommence their operations by the Lagos government.

Abiodun Alabi, a commercial tricycle operator, said, “We feel we are the ones being governed, and since that’s the case, we believe the government should not make decisions that will discomfort the masses, but what is happening now is discomfort. What we are hearing is that they don’t want us to operate again even when we are not posing any significant threat.

“On behalf of my colleagues in this business, I am pleading with the state government to put us in their considerations. We don’t have anything else to do, there are lot of graduates among us.”

Jamiu Adeyemi, who said he has been working as a keke driver for over 15 years, explains, “I have been driving Keke Napep for no less than 15 years. There is no other job I can do. I take care of my family with driving Keke Napep. Now that we have been banned, I don’t have any work to do. I just sit around. Please help us plead with Sanwo-Olu to pity us.“

Adeyemi added that the transport industry can be better regulated, as his colleagues are ready to cooperate and comply with any directive given in that regard.