Locked and thrown out of her office by a government minister, Nigeria’s diaspora boss fights dirty on Twitter. There was some method to her Sunday madness.

The Chief Executive Officer (CEO) of the Nigerians in Diaspora Commission (NIDCOM), Abike Dabiri-Erewa, had to go public with her feud with the Minister of Communications and Digital Economy, Dr Isa Pantami, because she had exhausted all options for an amicable resolution, Pulse has learnt.

On May 23, 2020, Dabiri-Erewa recounted how she and members of her staff were locked and thrown out of their office space by Pantami.

“In one year, we don’t have an office. The office we got, given to us by NCC (Nigeria Communications Commission)…but we were actually driven away by the Honourable Minister of communications and Digital Economy, Mr Isa Pantami.

“Within two days, they drove us out with guns and what happened? The place was given to us by NCC…. 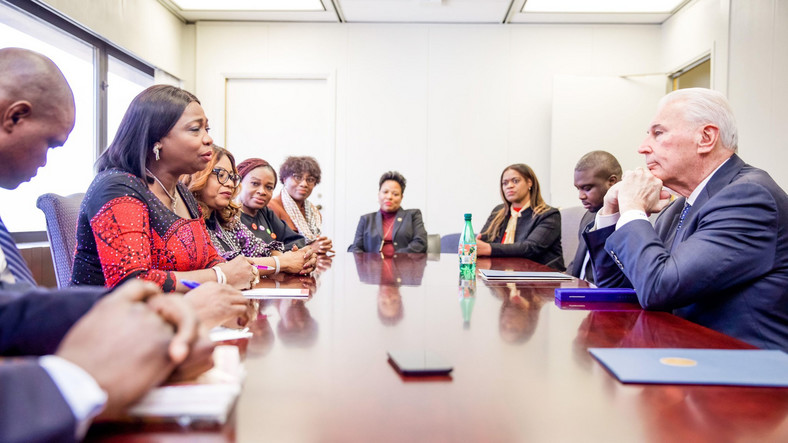 “You know we all help each other, NCC as an agency of government said there is a place you can use to settle in, and just as we settled in, I was in Ethiopia when I got a call. I thought that it was a joke.

“I came back from Ethiopia on Thursday, this happened on Tuesday. By Friday, when I went to the office, guns, armed men had taken over the place. I thought it was a joke. But here is the thing, I’m a government employee, so is he. It’s government business,” Dabiri-Erewa said between laughs.

Pantami would go on to call Dabiri-Erewa a liar. “This is a fat lie from her. The owner of the building @NgComCommission has faulted her lies on their social media platforms. The minister has never given that directives (sic) to any gunman. We need to be very objective in reporting. I have never sent any gunmen there, and I have no one,” he retorted.

“An Islamic scholar should not lie, Hon Minister ( Phd). You did that to me because I am a woman. Your disrespect for women is legendary. Left the ugly incident behind me since February. But please release all our office equipment. Public office is transient,” Dabiri-Erewa wrote on Twitter.

For most of Sunday, May 24, Dabiri-Erewa was heavily criticized on social media platform Twitter, for calling out a fellow appointee of the President Buhari administration in public.

However, the former member of the House of Representatives said she had been left with no choice after exhausting all resolution channels.

A letter from one govt appointee to the other

On May 15, Dabiri-Erewa wrote the following letter to Pantami:

REQUEST FOR RETRIEVAL OF ITEMS CARTED AWAY AS A RESULT OF THE SEIZURE OF OUR OFFICES AT THE NCC ANNEX OFFICE, MBORA DISTRICT, ABUJA., BASED ON YOUR INSTRUCTIONS

The above subject refers please.

Recall that the staff of the Nigerians in Diaspora Commission (NiDCOM) were denied access to the 5th floor of NCC Annex office at Mbora District, on Tuesday 11th February, 2020 on the instructions of Your office. This came after the occupation of the said floor by the staff of NIDCOM, based on NCC’s earlier directive which granted us access to use the entire 5th floor of the Building.

It was common knowledge that work had commenced in the building as a result of which various furniture and equipment were deployed for use in the building. It is gratifying to note that some of these furniture items were donated to NIDCOM by NCC., while several others were procured by Nidcom.

It is however sad to note that on the 14th February, 2020, the offices on the 5th floor were broken into without our knowledge and carted away properties belonging to the Commission and staff of the Nigerians in Diaspora Commission without our consent as well, purportedly on your further instructions.

I am therefore overly concerned about the current state of these properties of the Commission and that of its members of staff. Not only are there sensitive, private and public documents at the risk of being damaged or lost, but there are expensive and irreplaceable personal belongings of the staff of the Commission at large, with no assurance that they are properly stored.

Therefore, I am kindly calling on your good office to provide us access to the whereabouts of our belongings so we can jointly take inventory and retrieve them in the soonest possible time, in order to enable us serve Nigeria and its Diaspora community all over the world.

Please, accept the assurances of my esteemed regards.

Pulse has been told that Pantami ignored Dabiri-Erewa’s letter and the concerns she raised therein.

Sitting on bare floors to work

One source tells Pulse that Dabiri-Erewa, who was appointed Chairperson of the diaspora commission by President Buhari on November 6, 2018 “has had no permanent office, no budget. But she has soldiered on.

“Some of her friends helped her secure an abandoned 4th floor complex within an annex of NCC. Her staff moved in and they managed to fix up the place. Mind you, they were still using their personal laptops, printers etc.

“Then Pantami came and saw them there. Instead of calmly approaching her and asking her to leave, he sent a letter to evict them. He gave them one week. Meanwhile, he was aware that she was in Addis Ababa with the president when he sent in the letter. 48 hours later, they were forcefully evicted and their properties confiscated,” the source who craved anonymity for this story, shared.

On why she didn’t take the matter to the relevant departments in the presidency or in the federal bureaucracy, the source said; “Abike wrote and explained to the Department of State Security (DSS), the Chief of Staff (the late Abba Kyari) and the Inspector General of Police (IGP) Mohammed Adamu. All of them refused to act because Pantami was Kyari’s boy.

“She did a detailed report on it, sent it to the former CoS who sat on it and frustrated all her attempts to at least get the minister to release their properties.”

One employee of NIDCOM tells Pulse that some of Dabiri-Erewa’s staff have been sitting on bare floors in a makeshift apartment in the last couple of weeks, to get work done.

“Madam has been begging around for another space. At the moment, she’s making do with one small, single room.

“Some diaspora staff sit on the floor. As in, we sit on the floor with laptops. I have never sat on a chair of my own since I joined NIDCOM. I have my laptop on the staircase, which is where I work from.

“We have been going through all these while a whole floor is empty because Pantami wants it for himself. It’s frustrating,” the employee who pleaded that his name be left out of this story, shares.

She doesn’t regret speaking up

On Sunday night, a relieved Dabiri-Erewa told a couple of friends that she had to speak up for posterity. “If I don’t speak, in the future, someone will ask why I kept quiet. I have never been one to suffer fools gladly,” she said.

In an angry text sent to a couple of friends afterwards and seen by Pulse, a fuming Dabiri-Erewa said: “The problem with everyone, including all of you here, is that we will rather sweep things under the carpet. Be quiet. Be afraid. Not me. I will always fight against injustice.

“Pantami or his choice can come and take over NIDCOM. I have come a long way. When we were going around shouting ‘Sai Buhari, Sai Baba,’ where was he?

“A dysfunctional society where we worship money and power, where merit does not count and where women are disrespected the way Pantami did to me, will remain retrogressive.

“I’m making no more comments on this. So the almighty Pantami could not call me, tell me he wants the office back, and we pack out appropriately? But he breaks offices, locks up all our items. Since Feb 11.”

Pulse has also been reliably informed that the president’s new Chief of Staff, Ibrahim Gambari, put a phone call across to Dabiri-Erewa shortly before midnight on Sunday, May 24, to see how he can address some of her concerns and help her secure a new office space.

“Sometimes, you have to shout to get things done in government. Dabiri-Erewa knew what she was doing when she went public. And now she’s got the government’s attention at the highest level,” one of our sources adds.

List of 8 Items Banned from Being Exported by Nigeria Customs

2023: 3 Reasons Why Peter Obi Has an Edge Over Tinubu, Atiku, Kwankwaso

x         Analysis has shown that the presidential candidate of the Labour Party, Peter Obi,…
byTOPNEWS MEDIA

Here are the latest coronavirus figures around the world

x       Sleeping with your phone near you can be harmful for your body functions and…
byTOPNEWS MEDIA
Loading Comments...