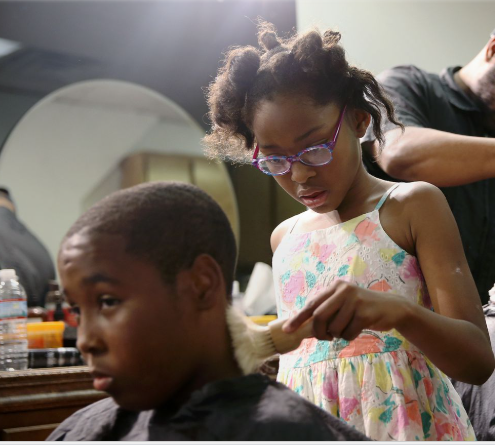 Tagged World’s Youngest Barber’, Neijae Graham-Henries found her passion when her brother decided not to follow through with the Junior Barber Academy in North Philly and took his spot in the class instead.

She was seven at the time and was the only girl in the six-week course.

Now nine-year-old, she spends her time going to school and giving free haircuts to those in need and at the same time mastering her skills from Philadelphia barbers.

Footage of her working went viral on social media leading her to receive national attention from outlets like BuzzFeed and Inside Edition.

She also got invited to speak at the Essence Beauty Carnival in New York City.

Graham-Henries is confident about her career in a male-dominated profession and her resolve to pursue her passion has won her the World Record Academy title of “World’s Youngest Barber’.

Until she’s 16 before she can secure a barber’s license in Pennsylvania, Graham-Henries must provide free haircuts under the watchful eye of a licensed barber.

The youngster doesn’t just enjoy cutting hair, she said she enjoys sleeping, eating, dancing, and playing video games like Minecraft. She is a kid with big dreams.

The Award: A Story From Tadese Adejumoke Sharon
COVID-19: 7 Things To Know About People Who Are Asymptomatic
Advertisement