The Cambridge Centre for Applied Research on Human Trafficking Summer Symposium, Day 5 – Kwara First Lady advocates for Youth involvement to get rid of the menace 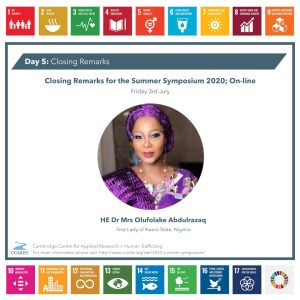 Kwara First Lady advocates for Youth involvement to get rid of the menace.

The First Lady of Kwara State Dr. Mrs Olufolake Abdulrazaq advocated for the need to involve youth to get rid of the vices associated with human trafficking.

Her Excellency reiterated this at the online Summer symposium organised by the Cambridge Centre for Applied Research on Human Trafficking, while answering question on how to maintain and nurture effective partnership towards combating Human Trafficking globally.

Dr. Mrs Olufolake stated that trafficking affects women and girls proportionately especially in areas of Trafficking for sexual exploitations, forced labour and promises of better life abroad on the promises of perceived greener pastures abroad that people jump on whilst ending up in modern slavery.

Kwara had its fare share recently when the Governor joined forces with the Federal government and other stakeholders to get some young women back into the country who had allegedly fallen victim of trafficking and modern day slavery.

Her Excellency emphasised on the need for effective global, national and local partnerships to root out the problem as too many of our youth and vulnerable groups were getting engaged only to end up in very dire situations in the society. 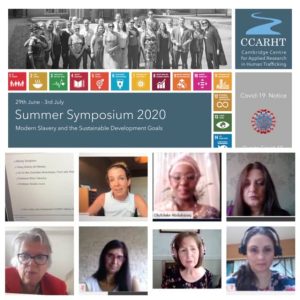 The participants further agreed on reaching a collaboration to include Kwara and the development of Public- Private partnership and Civil Societies engagement. Dr Olufolake also highlighted the need to combat associated factors such as Drug abuse, lack of education and child forced labours.

Aside from being a panelist, HE Dr Abdulrazaq gave the closing statement where she commended the research centre for its work putting up  the symposium over the past five years.

She particularly commended the Executive Director for getting over 85 panelists for this year’s symposium and wished them well in putting forward the recommendations for implementation around the world.

There were over 85 panelists over the week long event that took place between 29th june – 3rd of July, 2020

What next after the ENDSARS panel report