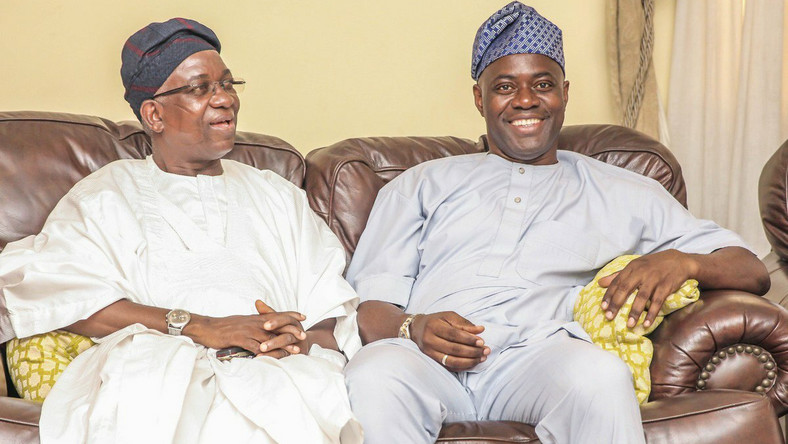 A mild drama ensued on Sunday, July 5, 2020 at the Oluyole, Ibadan residence of the late former Governor of Oyo State, Abiola Ajimobi.

Reports say the state’s Deputy Governor, Rauf Olaniyan, was denied access to the eighth-day Fidau prayers holding in the compound.

Governor Seyi Makinde of Oyo State and the family of Ajimobi, who is his predecessor, have been on a warpath of some sorts for quite some time.

However, days after his death, there was still some controversy over his resting place, with the Oyo government telling his family that he couldn’t be buried on a piece of land of their choosing because the said land was the subject of litigation.

Ajimobi’s widow, Florence, would later snap at Deputy Governor Olaniyan in her living room after her husband was buried on Sunday, June 28, 2020, asking him why the governor of a state her husband served for eight years, didn’t deem it fit to call or send a condolence text message to the bereaved family.

The governor of Oyo state never called me. He never signed a condolence message. Never called even when my husband was on sick bed for one month. What politics are you playing, please?”, Mrs. Ajimobi had asked.

Porscheclassy reports that the Ajimobi family had announced that the Fidau prayer was going to be a private affair, with the public urged to follow proceedings through virtual online channels.

Olaniyan arrived at the Ajimobi neighborhood at about 11:20 am in a convoy of five vehicles.

The convoy was however stopped by police officers and members of other security agencies.

The officers insisted that only the deputy governor’s car was going to be allowed into the street to join the prayer. 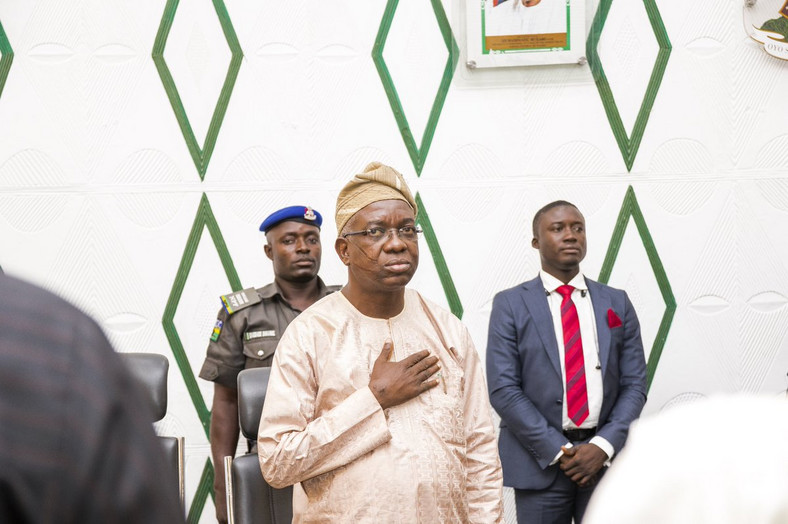 “But on getting to Ajimobi’s house, the gate was also locked. The deputy governor’s aides introduced their principal but they were told that the gate had been locked and that Mrs. Ajimobi was in possession of the key. Olaniyan waited, believing that the issue would be sorted in no time.

“After waiting for about 15 minutes, however, without any positive development, Olaniyan left the residence.”

In a statement sent to Pulse, Ajimobi’s spokesperson, Bolaji Tunji, said the deputy governor arrived late for the event.

He also said the event was strictly a family affair.

“The deputy governor arrived after the prayer had started. The event was strictly a family affair.

“There was a need to comply with the COVID-19 protocol as established by NCDC- social distancing, not more than 30 people in a place and seats arranged, accordingly. After which the gate was shut.

“No one was aware that the deputy governor was coming as neither the advance team nor the protocol informed us.

“By the time we got to the gate to usher him into the sitting room, he had left. Everything happened within a spate of 10mins.

“Through a serving senator and a former attorney general, we tried to get in touch with him that it was not to slight him and he could sit in a private sitting room provided by the family. Unfortunately, he had left. We however apologise to his Excellency,” Tunji offered.

He was governor of Oyo state from 2011 to 2019. He was the first Oyo governor to serve two terms.

x       However, if Mr Malami is convinced that his position is backed by law, he…
byTOPNEWS MEDIA

How Lagosians returned to church

Fake news Ukraine and Russia crisis: View the latest news on the war between Russia and Ukraine

Pastor Speaks on Tithing, Says People Should Pay More than 10% Because Economy is Bad

x     A Nigerian pastor identified as Gosple Agochukwu has sparked a debate online over his advice…
byTOPNEWS MEDIA
Loading Comments...