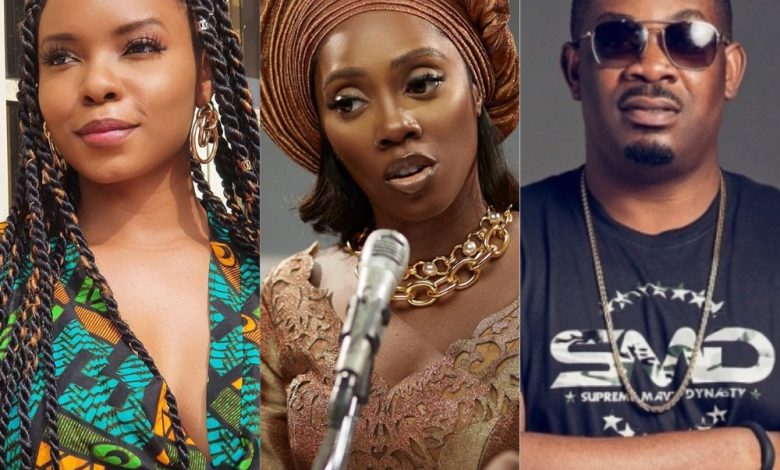 Topnewstv examines a news report about the DSS quizzing artists.

On Monday, September 1, 2020, an online news platform reported that Nigerian music producer, Michael Ajereh who is popularly known as Don Jazzy, and Tiwatope Savage better known by her stage name Tiwa Savage, were quizzed by the Department of State Services (DSS) and warned to tone down their criticism of the President Muhammadu Buhari administration on social media.

Specifically, the widely read news platform had reported that Tiwa Savage, who began a movement known as “#WeAreTired” to protest rising cases of sexual violence and rape in May, June and July on social media, has abandoned that hashtag and movement after being quizzed by the DSS.

Don Jazzy at an event (The Beatz Award)

Don Jazzy, Tiwa Savage, Yemi Alade and Waje were also summoned by then Lagos State Commissioner of Police, Zubairu Muazu and warned to steer clear of political comments in order not to incur the wrath of the President Buhari administration, the report added.

It was also reported that Don Jazzy and Tiwa Savage have toned down their social media posts in recent times after their meeting with the DSS and boss of the Lagos state police command.

A source who works closely with the artists tells Pulse that a couple of months ago, in the thick of the recent Black Lives Matter protests in the United States “Nigeria was also facing similar issues of human rights abuses, killings and rape here too.

Tiwa Savage goes all sassy on us [Instagram/TiwaSavage]

“It was more along the lines of ‘let us work together seeing as you guys have these huge social media following and platforms.

“It was a similar meeting the artists had with the police boss. It was not an interrogation meeting or a meeting held to gag them at gun point. It was a partnership meeting held in an atmosphere of conviviality and one devoid of antagonism.

“That news report is not correct. Kindly disregard it,” says the source.

Another music label boss who rolls with Jazzy and Savage tells Pulse that around the time of the incessant rape incidents in Port Harcourt, Edo, Oyo and suburban Lagos, there was a meeting between the musicians and security operatives.

“But this meeting was held in a friendly atmosphere. There were no threats at all. And no, the name Buhari wasn’t even brought up at all,” he says.

Security sources who craved anonymity for this story have also corroborated the quotes from the music label bosses as highlighted above.

Don Jazzy has also laughed off the report on his Twitter page.

Even though a couple of meetings did hold between the artists and some of the nation’s security bosses, these meetings had nothing to do with warning them about criticizing the president as the online news platform relayed.

These meetings also had nothing to do with the frequency with which Don Jazzy and Tiwa Savage post on their social media platforms these days.

This perspective, as inserted by the online platform, was at best speculative, an overreach and largely erroneous.

The entire report is therefore incorrect and should be regarded as yet another sensationalist, falsehood bent from the nation’s online media industry.