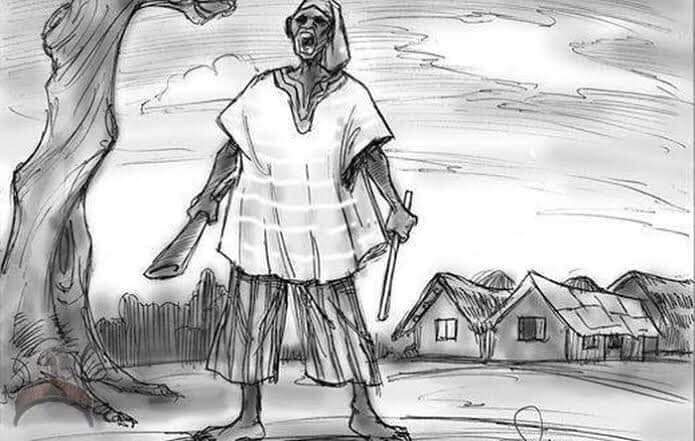 There is a small town on your way to Oyo, just behind Fiditi, it’s called “Ilu Ajẹ”. Which literally, translates to “Town of Witches”.

Ilu Aje is a relatively large agrarian community with vast lands located between Ilora and Jobele towns in the Afijio Local Government Area of Oyo State. Semantically, “Ilu Aje” is literally a town of prosperity in sales or business transaction. However, history bequeathed it with a weird homophonic nomenclature of “Ilu Aje” (Town of Witches) following the intervention of Akinyolu, an herbalist (Ifa diviner) from the town, who cast a divination for a late Alaafin regarding a Prince of his who was missing.

In the late 80s, there used to be a sign board in Fiditi that pointed to the path to the village, the signboard had the inscription :

Lots of people used to fear indigenes of Ilu Ajẹ because it was said that every man in Ilu Ajẹ is born of a witch, and every woman in ilu Ajẹ is a witch!

But that is not the case…

HOW THE NAME WAS DERIVED

A king’s son got missing ke? Infact, scrap it, Alaafin of Oyo during Oyo-Ile era (old Oyo empire) was not a king, he was an Emperor! No, a deity!

Even up till date Alaafin of Oyo’s power is paramount.

Death the father, death the mother, second only in command to the gods!

When the son of such an entity gets missing, of course it’s bedlam in the whole empire! Hunters were commisioned to look for the son. Every nook and corner of Oyo town was searched. Every crevice was checked, all hilltops were visited, yet the Alaafin’s son couldn’t be found.

Like the shepherd who had 99 sheep but was despondent about the lone missing sheep, the father was heart broken about his missing son.

Herbalists were consulted, from Oyo to Ife. Magicians were called upon from Egbado to Ilaje, yet no one could help find the missing son. Kabiyesi was sad, Olori was pained, the Oyomesi were not happy, the King’s household in confusion, the whole empire was gloomy.

Then on one market day by noon, an old tattered herbalist called Akinyolu landed in the market square asking for directions to the Alaafin’s palace.

The market women looked at him with disdain as a result of his dirty and wrinkled look. After much ado, he was led to the palace.

He was restricted by protocol to see the King, Iku Baba Yeye. The Palace guards inquired why he is there to see the King. He insisted the matter is only for the Alaafin’s ears. He was turned back until one of the guard told the others that they should seek audience with the King and ask his consent.

As the king and chiefs were in the open court deliberating on the issue, Akinyolu entered into the palace court with his apo ifa (oracle bag), everyone looked at him in askance,

Can’t you see we are in the middle of a serious issue?” the chiefs asked him.

“I am a babalawo from a remote and secluded part of the outskirts of town, i have come to help you with your missing son”.

The region of “Ilu Aje” had no name then

“Babalawos from ‘saner climes’ have tried and failed,

oniṣeguns of high repute have attempted and fumbled, who do you think you are? Please get out!”.

Kabiyesi was just looking at him in a non-interested way. Not to treat Akinyolu in a rude manner, Kabiyesi asked him to go ahead, but he should make it snappy.

Hear o north of the universe

Listen o south of the universe

Hear o wise ones of the east

Listen o knowledgeable ones of the west …..

Akinyolu made his divinations and told the king thus:

“Kabiyesi, you need not stress yourself. In 7 days time, when the sun is directly over the head, and man stands upon his own shadow, get 5 chiefs to sit under the (Igi Emi) shea butter tree at the eastern border of the town. They should be dressed in white, and they should continuously clap their hands rythmically in unison,

On the 21st clap, the king’s son would have reached them and he would ask for water”.

It was clear, Akinyolu must be insane!

The chiefs concluded in there mind

But one tries everything to find a lost son. so, though the recommendations of the babalawo was crazy, the Alaafin still carried them out.

Behold, on the 21st clap, the king’s son came to them.

When the son was brought to the king and the events narrated, the Alaafin was said to have asked:

“iru babalawo adifaṣẹ bi ajẹ wo ni babalawo un?”. (What sort of herbalist who makes divinitions that comes through like a witch’s proclamation is this?)

The people anwered that he lived by a forest patch at the outskirts of Oyo.

The King instructed that Akinyolu be clothed in fine apparel and be treated like the important guest he was.

The king later told Akinyolu to ask for anything, just anything, he would be ready to oblige.

Akinyolu said : ”Kabiyesi, all I ask for at my advancing age is that I go back to my forest in peace, you may chose amongst your slaves to follow me back to the forest to live our own life there”

The King obliged and gave Akinyolu gifts and instructed he be given about 30 slaves to join him on his journey back to the forest.

Akinyolu was made the Baale of his old forest now a thriving town. As he was called “Aje” by the townsmen, so was his domain named “Ilu Aje” which literally means “The witch town”.

For a long time, when people want to describe the area where the herbalist lived, they would say

“ilu adifaṣẹ bi ajẹ” (One who divines or foretells with precision like a witch).

Over time, people just started shortening it to it “Ilu Ajẹ”, they omitted the “adifaṣẹ”.

That was how the town Got her name and Akinyolu ruled as the first Alaje of Ilu-Aje.

Ado-Awaye: The 7 wonders of the mysterious town in Oyo
The List Of 54 Obas Who Are Entitled To Wear Crowns In Yorubaland Compiled In 1931