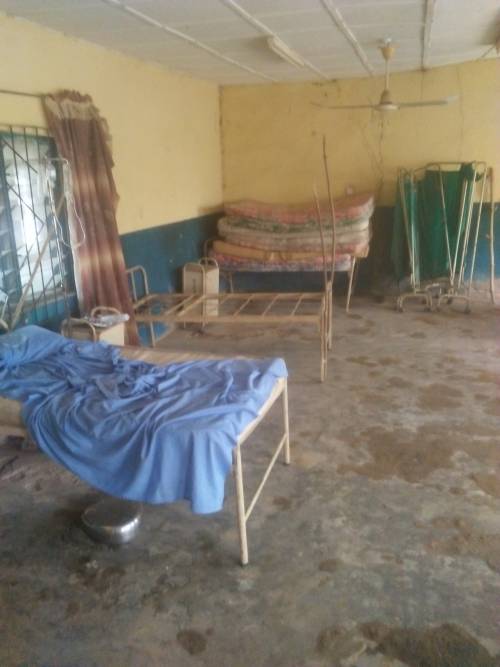 The male and female wards at the Kogi State Comprehensive Health Centre, Edega, Ibaji Local Government Area, are presently empty and dilapidated, due to a barrage of problems that has faced the hospital for years, Olaleye Aluko, who visited the facility, reports

When Esther, a middle-aged woman, felt sharp birth pangs on a sweaty afternoon in May 2020, she knew it was time for her to be delivered of her baby. As someone from a poor family who lived from hand to mouth, she and her husband had no option but to rush to the Comprehensive Health Centre, Edega, Ibaji, Kogi State.

A look at the facility and the condition of its facilities would dissuade any patient but their economic reality left them with no choice.

While attempting the delivery, the nurses on duty informed them that Esther would have the baby by caesarian section due to some complications noticed, but there was no doctor available in the hospital to perform the procedure.

A grim reality stared the couple in the face – she had to be prepared to travel to neighbouring Idah Local Government Area hospital – a journey which would take a minimum of an hour and 30 minutes because of bad roads.

“She died on the way,” a nurse at the health centre, Ibaji, narrated.

“They came here and we referred them to another hospital immediately because it was not what we could handle. She was supposed to have a CS. We were doing CS before when doctors were around in this hospital, but not anymore. Doctors were no longer available, so we had to refer the woman elsewhere.”

Apart from the absence of doctors, a visit to the Kogi State Comprehensive Health Centre reveals more sordid conditions the facility is currently in – a situation which the hospital nurses, other workers and residents described as horrible.

Wards Deserted Due To Snakes, Mosquitoes

TopnewstvReporters observed from the entrance that the hospital premises were overgrown with weeds and unkempt while the walls showed signs of weakness and had openings.

The nets on the windows of the male and female wards were partly torn, giving free access to mosquitoes and other harmful insects.

The female ward was empty and all its beds had been moved out; some of the old bed springs were put at the back of the dilapidated building and now covered in dirt and weeds.

The male ward was a more chilling eyesore; the floor was dotted with holes wide and deep enough for rodents to live, while the ramshackle beds looked unkempt, and appeared to have been abandoned.

The wards had no functional toilets, no ventilation and no electricity.

The general perception among the workers was that Edega Comprehensive Health Centre, which was established in 2006 and said to have even been upgraded to a General Hospital four years ago, paints a perfect picture of the nonchalant governance style and abysmal health management in Kogi State.

A worker in the hospital, who spoke on condition of anonymity for fear of victimisation, told SaharaReporters how snakes, mosquitoes and lack of basic amenities had forced people to abandon the hospital.

“We now have a few patients coming here. Some of them still came two days ago. Throughout the day, there is no electricity. We experience 24 hours of darkness here. When the evening comes, we make use of torches and the Hausa light. So, the fans and other electrical appliances you see here are not working.

“We have only four nurses. We do not have a doctor. Snakes usually come into the hospital. Big snakes have entered the wards and we had to come together to find ways to kill them. We killed one in December 2020. It was even around Christmas time. We have killed another one this January, just in front of the wards.

“When the snake came in December, some patients were inside the ward and they all ran out, including the nurses,” the worker said.

Corroborating Umola’s account, a nurse added that the snake attacks always double during the rainy season due to the overgrown environment.

“For the deserted female ward, we stopped having many female patients because of the situation of the hospital. So, the place became useless. Also, we handle maternity cases once in a while. We have a tiny room we use if anybody comes.

“We are used to the darkness. There is no power supply. Or do you want to talk about the mosquitoes here? We use Hausa light and some solar torches. Snakes are real in the hospital. It is not news. During the rainy season, we have more snake attacks. Grasses surround the hospital and there are no labourers. So, what do you expect? We sometimes weed the frontage ourselves,” the nurse lamented.

Ibaji is spread across several communities of over 300,000 people, with Onyedega as the LGA headquarters.

Sadly, this is the only general hospital in the entire LGA and is located in Onyedega.

A resident of Onyedega, Precious Ekele, said she and other women in the area had stopped using the hospital due to the deteriorating facilities.

“The hospital has no water and electricity, and the place is not accommodating at all. The rooms are not clean. But I have used the hospital before. I went there two years ago. I went to treat malaria,” Ekele, a mother of two, told TopnewstvReporters.

“It was December 2019 we last visited there. Pregnant women and we, nursing mothers, have s topped visiting the facility. But you know, most Ibaji people don’t have money to use private facilities. Our lives still depend on the general hospital.

“We want the government to renovate the hospital, so that if we go there for treatment, we will not get bitten by snakes. It is true that mosquitoes and other terrible insects disturb patients in the hospital wards. There are no doctors there; they only have nurses. We need more doctors to be around here. Bats also come to disturb workers and patients at the hospital. There is no fumigation, no environmental care.”

TopnewstvReporters learnt that most women in the Onyedega community, who want to give birth and cannot afford to go to Idah LGA, use a midwife in the area who uses local medicines.

On the hospital premises, there is a large water tank, meant to be connected to a borehole and supplying the hospital, but it is already overgrown with weeds.

The tank, which is more than 10,000 litres, appears not to have been used for a long time, as it is already rusting up where it is erected.

At the hospital, a nurse explained further that they use motorcycles every day to fetch water from River Edega to use in the hospital – a trip of about 40 minutes.

“This hospital used to be a very effective facility, from 2006 until about 2013 when government screenings and postings came. That was how some doctors and nurses left. Then, there was a strike and our facilities began to gradually deteriorate.

“When one Dr Akor left in 2010, the situation became worse. Once in a while, when we had doctors, they came from faraway Idah LGA; none was resident here. We have not had a doctor here in over a year.

“We are the nurses, labourers, security guards and all. A lot of visitors from the state Ministry of Health headquarters, Lokoja, have been coming to this hospital. They are aware of these problems,” the worker stated.

The nurse noted that there were times when the state officials came up to four times during the year and made promises to the hospital which were never fulfilled.

“There is nothing happening here that the state Ministry of Health is not aware of; the state House of Assembly and other authorities. This is the only general hospital in Ibaji. It was a comprehensive hospital but now called a general hospital. Most of the time, we are the ones who call on the local government chairman and other officials but you know their usual language – they will look into it.

“So, electricity is needed. Water is needed. Labourers are needed. Our wards are dilapidated,” another worker said.

Another nurse, who preferred to remain anonymous, noted that any nurse or doctor transferred by the state government to the Ibaji hospital always almost immediately start processing their transfer to someplace else.

“I have been in this hospital since it was established. They don’t even transfer us again. What happened is that when they bring new nurses here, those ones will not stay. They just arrive, look around, pick up their bags again and leave. That is why the authorities have not transferred us.

“For barely a year, we have not had a doctor in the hospital. The last screening the government did affected most of the doctors. Since the current administration came in, there have been lots of screenings,” he added.

Just as one is entering the hospital premises, one is confronted by a large generator house to the right which is also already overgrown with weeds.

Rather than supply light to the facility, the appliance is only there as a caricature and a reminder of what the hospital used to have.

A senior nurse said the hospital generator last worked in 2014.

The nurse said, “It was around 2014 that this rottenness started. That was around the time we last used this generator. That was when we last had a rural medical outreach.

“In the evening, everywhere is dark. Everywhere in the hospital just looks gloomy; yes, we have issues with mosquitoes and snakes. When you come out by 12am, you see snakes but God has been helping us to kill them and protect ourselves. We thank God nobody has been bitten.

“Despite the poor facilities, there are some of the residents who don’t have any option but to come here. Just yesterday, we discharged a few patients; we treat a number of cases here. We treat them when they have typhoid fever, malaria, cough, asthma, hypertension and others.”

To add to the misery of the hospital, it was learnt that the only ambulance meant for the centre has been taken away to Idah LGA and is being used by political leaders for personal purposes.

TopnewstvReporters learnt that one of the Special Assistants to the Ibaji LGA Chairman, Williams Iko-Ojo, used the hospital ambulance two Fridays ago for the burial of his father – a development which angered youths in the community who threatened to vandalise the ambulance.

The youths were later pacified not to take the law into their own hands.

The nurses at the hospital confirmed that its only ambulance was in private hands in Idah and did not know what it was being used for.

A lawyer and President of the Ibaji Progressive Youth Foundation, Apeh Kelvin, said the foundation had written a letter to meet with the state governor, Yahaya Bello, to discuss the dilapidated and sorry state of the hospital as well as other challenges facing the Ibaji community.

A resident and father of three children in the area, Okolo Johnson, said nobody would advise anyone to use the hospital because of the poor state of its facilities.

He said, “We need to rush any sick person to neighbouring Idah LGA. But sometimes when we try to get sick people to Idah, some of them die on the way. And there is no other hospital around here. People don’t go to the hospital here for treatment again.

“We prefer to use local medicines on our pregnant women. Everyone is scared after the several lives were lost last year, owing to the hospital’s poor facilities. The ambulance meant for the Ibaji General Hospital is now being used in Idah for commercial activities.”