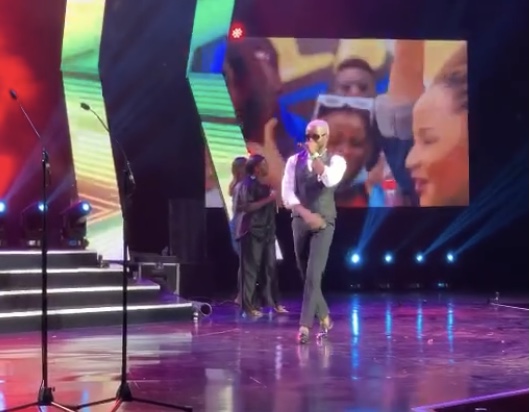 Better planning could have saved the 14th Headies, but its production was irresponsible, haphazard and unprofessional. Most categories had compelling wins, but horrible wins, pandering and credibility issues linger.

On February 21, 2021, the 14th edition of Nigeria’s premier music award, The Headies was held via virtual and live means due to COVID-19 restrictions.

The glitz collided with the glamour; foundation swallowed eyelashes, face masks disrupted identification and the sense of style of new-age Nigerian artists was caught in-between wannabe streetwear of the homeless and taking excessive liberty with athleisure.

Y’all should know when to stop; branding starts with simple decisions and a sense of occasion. Also importantly, ‘vibe’ must be sorry that it ever came out of Fresh L’s tweet in Q1 2020 because it must have been said more than 78 million times.

The 14th Headies are calling for entries. (The Headies)

Some performances on the night had been pre-recorded and the live event – which featured nominees – was held at Eko Hotels and Suites, Victoria Island, Lagos. The red carpet began at 5pm while the main event commenced around 9:50 pm and the year-in-review was between July 2019 and September 2020.

This event is the 14th edition of an award heralded by Ayo Animashaun and his company, HipHop World. As much as people who struggle to maintain a consistent run for one year due to dwindling clout like slagging HipHop World, the company deserves some props for even running a show for 14 years, albeit with sizable hiccups.

For comparison; in 13 years, the MTV Africa Music Awards has only been held six times. This year, they made the mistake of aligning with Uganda, only for the ghosts of Museveni’s atrocities to come out screaming with Sango’s battle axe.

Before the event, Hip-Hop World tried to salvage the reputation of the Headies Award by interfacing with artists and creating an artist relation program. The nominations for the show were also inclusive, but familiar problems – some on worse scales – still plagued the Headies.

The hosts of the red carpet were awfully ignorant about the Nigerian music industry.

One of them said “This dude” to describe DRB Lasgidi while the other butchered Moelogo’s name with a blunt machete from a slaughterhouse in Cadiz. Nonetheless, they can be forgiven for the incoherence because the picture quality and the sound – midway through the red carpet – were severely obstructed by a nearby band, or whatever that was.

Whatever is worth an attempt at all is worth execution with aplomb. For the glitz and glamour around the biggest night in Nigerian music, the execution of the show left much to be desired.

The Headies deserve sympathy for being in uncharted waters as they are forced to hold virtual events, but better planning could have saved this show. They production of this show was simply irresponsible, haphazard and unprofessional. If we have sympathy for you, and we keep giving you our time, you owe us a great show and great decisions.

A lot of Nigerian platforms have held successful virtual events with no hiccups, all it took was planning.

When the night finally looked to have stabilized, the virtual show was late and we could hear background conversations from Bovi, Nancy Isime and others backstage. We even heard Bovi say, “We go tell them, everybody go ginger…” just after a lady complained that the microphone wasn’t working.

How was nobody in the building aware that their chatter was being heard by the audience. Come on! They then wasted over 30 minutes more on ads on explore ads. Wait, na by force to explore? With the amount of time members of the audience heard, “14th Headies, it’s time to explore.”

Explore what exactly; how to become Indiana Jones? After over 40 minutes, a show that was meant to commence at 8 pm finally got underway. Then, the sound got bad – Stonebwoy’s performance was slower than the audio and J’Dess’ performance needed the microphone to be louder.

Alas, they wanted her to remain like the Asian girl from Pitch Perfect. As if that and the roughly executed ad breaks weren’t enough, the 14th Headies experienced the greatest faux-pas of all; broadcast on their HipTV and their livestream on Instagram and YouTube totally went off.

Fans had to visit Mhrelax’s page to continue the show. Unfortunately, Mhrelax was too preoccupied with celebrating his views and likes rather than actually focusing on capturing the video, for which he’s getting hailed.

Still, their Instagram and Twitter pages could not even salvage the situation with updates, either because the operators of those social channels aren’t even at the venue or because HipHop World likes leaving the broadcast of content for visual channels. Either way, the decision backfired badly.

At the end of the day, the Headies must still accept some praise for the pre-recorded performances of Stonebwoy and Master KG.

19 years ago, Eedris Abdulkareem released his debut album. By his sophomore and third album, his music became more political. His third album is titled, Jaga Jaga, an onomatopoeic expression about the scattered state of Nigeria. 16 years later, we are still here, maybe even worse than we’ve ever been.

Just like then President, Olusegun Obasanjo tried to prevent Abdulkareem from speaking about the hideous state of Nigeria, the Muhammadu Buhari-led administration continued to enjoy its oppression of Nigerian youths. It was nice to see him win Special Recognition.

While it is an upset, iLLBliss’s Lyricist on The Roll win for Lyricist on The Roll stays true to our time. The legendary Nigerian rapper took time out of a busy schedule to record a love song for his country, Nigeria. He speaks with passion, “Why is everything so f***** hard in our country?”

He won, but most people expect that award to go to AQ’s ‘Eunice,’ purely on the criteria for that category. That’s not to say iLLBliss doesn’t deserve it though, iLLBliss will never not deserve big moments. After 20 years of ups and downs, it’s great to see a legend win big on the biggest stage.

After a tiresome buildup to the main event, the Headies slightly salvaged the occasion with an amazing opening sequence; a satirical performance by a group of female-led, young Nigerian dancers.

With songs like ‘Zombie’ by Fela, ‘Freedom’ by Beyonce and ‘Great Nation’ by Timi Dakolo, they adequately dramatized the unfortunate events around the EndSARS protests and the Lekki Toll Gate Massacre, delivered tribute to FemCo with a female-led group of dancers who ended the sequence by being lifted on the shoulders of men, Babatunde Raji Fashola’s infamous Sherlock Holmes impression and the protest suppression in Nigeria.

It was both brave and aware in a country that witch hunts media organizations for standing with the people. Dancing to Beyonce’s ‘Freedom’ might have been a tad worrying and ‘Great Nation’ by Dakolo might be a roving cliche, but those were still memorable moments.

The Cavemen single handedly delivered the performance of the evening. Benjamin Okorie, the younger of the brothers stole the show with his famous ‘Anita’ vocal sequence.

Their authentic awe at winning Best Alternative Album should be one of the best moments in Headies history; no ego, no fake macho. They were nervous, clumsy and excited, and it was good to watch.

The two major highlights of the evening have to be Brymo’s win for Recording of The Year and Omah Lay’s ‘Next Rated’ moment. The Port Harcourt-bred artist flew onto the stage with friends and fellow Next Rated nominees, Oxlade and Bella Shmurda. He declared them his friends, they hugged on stage and called Tems his “baby.”

Props must also go to Jamopyper, for his energetic display, even though he hailed Wizkid more than he performed. Equally, there is this commendable transition from the older generation to the 2019 generation by the Headies.

The delectable Nancy Isime was a much-improved presence than she was in 2019. However, she and Bovi should go easy on the rehearsed jokes. Some of those jokes were so bad, laughing gas might have struggled to help viewers produce a piece of laughter. They must take some credit for the Burna Boy-Davido-Wizkid joke though – it’s accurate AF.

In the same vein, Bovi’s Wizkid-jokes and subtle hits at Tiwa Savage and Duncan Mighty were also good. However, we have not seen the end of this one. While a lot of the presenters were incredible on the night, one must highlight the two Yoruba men who climbed the stage and made every Yoruba person jealous of their H-Factor proficiency.

In 2020, Topnewstv did a Facts Only episode about Headies’ snub by Nigeria’s top brass. But on the night, Wizkid showed up and won the night. On a night that saw more star attendances than last year’s show, Wizkid was a crowning glory and it’s really commendable of him to travel to Nigeria for the Headies. Kudos.

For the most part, the Headies got the awards right. It was particularly fitting that Fireboy DML went home with the most awards after bagging the most nominations. It’s also testament to the 18 months he’s had.

Mayorkun’s win for Best Street-Hop will be chalked off under the ‘voting category’ arguments – which will still be funny, but wins for Praiz’s ‘Under The Sky’ and ‘Addicted’ by Niniola sum up the Headies’ issues with credibility. The same goes for ‘Apollo’ by Fireboy.

Although arguably a better, more cohesive and more topically clear album than Laughter, Tears and Goosebumps, it should not win Album of The Year.

First off, it didn’t even peak during the year in review, it was new. Laughter, Tears and Goosebumps is the most streamed Nigerian album on Boomplay; it had critical acclaim and it had acceptance. If it can’t be nominated, then give the award to Burna Boy’s African Giant. Credibility starts from when you can make good decisions without bias.

Burna Boy should not be denied his awards because he won’t attend an award show. It’s painful and it’s a shame on Burna Boy, but the Headies must be credible. While Wizkid made all of us happy by attending the show, was he the artist of the year during the year in review? No, not even close.

The only true contenders for that award – not nominations – should be Fireboy and Burna Boy, maybe Davido. Made In Lagos and its incredible success came after the year in review. This is why people don’t take the Headies seriously; pandering.

The Headies have done this nonsense for years.