House of Reps Adopts Peller’s Motion on Reinvigoration of NOA

Federal House of Representatives on Tuesday 16th March 2021 adopted a motion moved by Hon. Shina Peller, a member representing Iseyin/Itesiwaju/Kajola/Iwajowa federal constituency, Oyo State, on the need to reinvigorate the National Orientation Agency (NOA) for impactful discharge of its mandate.

In the motion, Hon. Peller noted that National Orientation Agency, which was established in 1993, is by virtue of its enabling Act required to re-orientate Nigerians on their general attitude and encourage them to take part actively and freely in discussions and decisions affecting their collective welfare.

However, Hon. Peller argued that that the NOA is incapacitated in discharging its constitutional responsibility of disseminating information and re-orientating Nigerians particularly during critical period like this when COVID-19 has left many lifeless and caused many households griefs.

Furthermore, he observed that the strategic plan for the National Orientation Agency (2017-2021) reveals that the Statutory Allocations to the Agency in the past years are inadequate for optimal performance of the Agency’s mandate as it is presently bedeviled with poor statutory allocation, poorly motivated staff, inadequate vehicles and other public enlightenment equipment.

Similarly, he also expressed concerns that NOA’s incapacitation has continuously prevented her from living up to its responsibility as a social re-engineering organization as stipulated in Section 4 of the Enabling Act which empowers her to function as an instrument for attitudinal transformation, public enlightenment, mass mobilization and national integration.

In addressing the afore mentioned problems, the House adopted Hon. Peller’s prayers and resolved as follows:

Responding to questions from journalists after the plenary, Hon. Peller explained that regular reorientation of Nigerians will serve as a preventive measure against imminent dangers, crises or chaos as the case may be, and added that the NOA has a constitutional obligation to ensure this.

In addition, he said this is part of what Lead Generation Initiative (LGI), a non-governmental, non-partisan and non-profit organization, aims to achieve with its various laudable programmes targeted at training, re-orientating and charging the Nigerian youth to stop lamenting endlessly about the maladministration of the country, but to contribute their own quota to nation-building right from their immediate communities.

It would be recalled that Hon. Peller’s bill for an act to amend the National Orientation Agency Act had last year passed through first reading at the floor of the House. 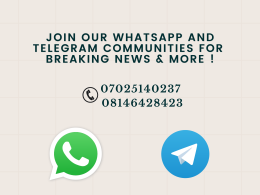 REVEALED: Identities Of 39 Children, Other Worshippers Killed By Terrorists In Ondo Catholic Church