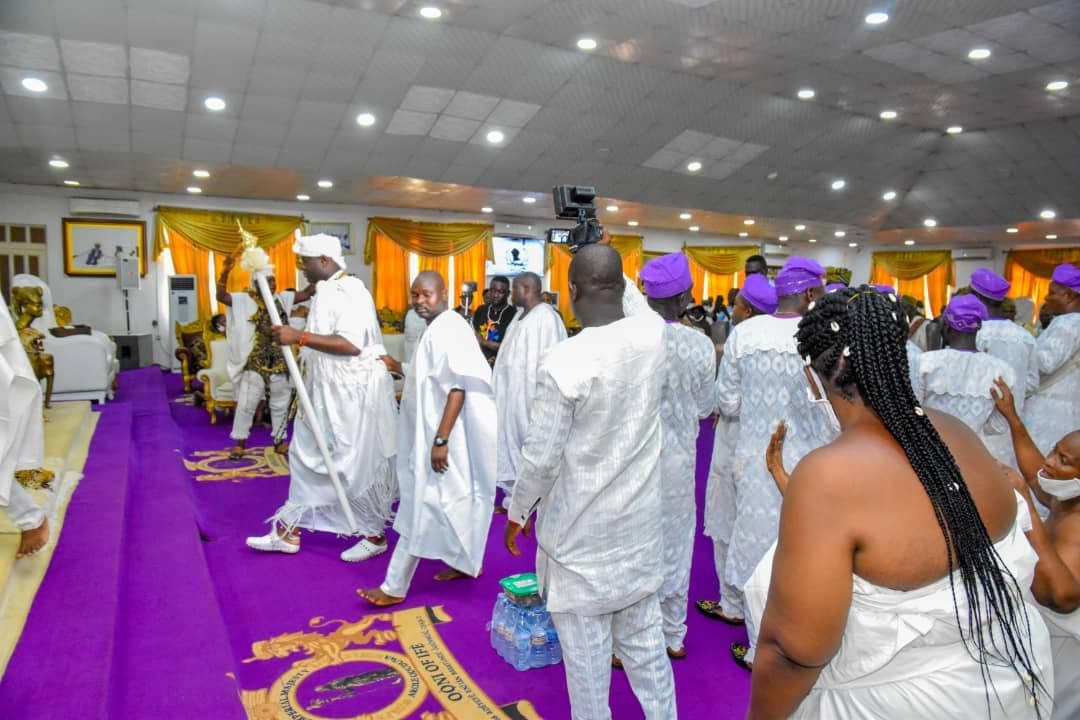 Not less than 1,000 Yoruba Women from Uruguay, Argentina, Mexico, United Kingdom, Papua Guinea, Venezuela, Spain, France, and other countries on Wednesday visited the Ooni of Ile – Ife, His Imperial Majesty Oba Adeyeye Enitan Ogunwusi Ojaja II in his Palace to express themselves on the need for the Yoruba Nation.

The Ooni in his response maintained that “Our Struggle for Self-Determination Can not materialise without Women’s Support.”

As one of the strongest pillar of the agitation, Prof. Banji Akintoye also said that the visit symbolises a declaration showing the departure of Yoruba land from Nigeria.

The Women, under the agies of Obinrin Oodua Agbaye, dressed with traditional ritual attires, consisting of white body wrappers and beads, all from the diaspora, numbering about 1,000, stormed the palace of the Ooni of Ife, Oba Enitan Adeyeye – Ogunwusi on sunday 11th April, 2021, demanding that it is either self-determination or nothing for the Yoruba Nation.

Led by their worldwide Leader, Princess Yeye Simisade Kuku-Onayemi and their Secretary-General, Dr. Owowunmi Babalola-Okocha, the women said the gods in Yoruba Land have mandated them to commence spiritual measures that will lead to the prompt actualisation of Yoruba Nation without 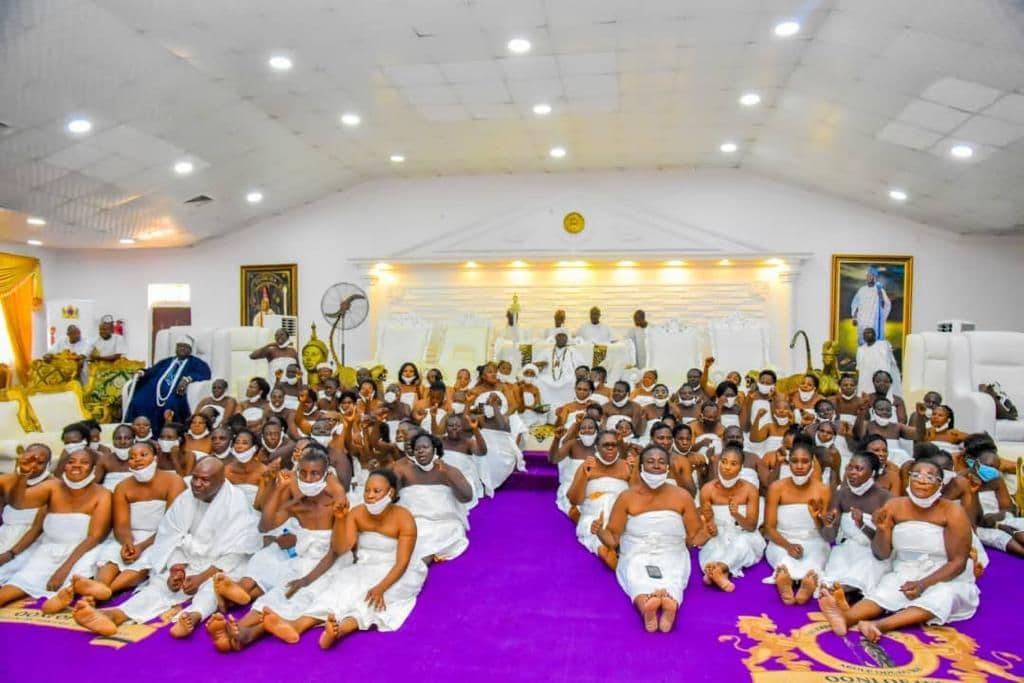 Omowumi, a resident of the United States, flanked by other Yoruba women from 37 countries such as Canada, Argentina, Uruguay, Mexico, United Kingdom, Paupa Guinea, Venezuela, Spain, France, amongst others, said the gods mandated them to conduct some spiritual measures in the palaces of Ooni of Ife, Alaafin of Oyo, Osemawe of Ondo, Ewi of Ado-Ekiti, Obaro of Kabba, Ayangburen of Ikorodu, Oloffa of Offa and Awujale of Ijebu Land respectively.

The women added that the outcome of the spiritual meansures which cannot be discussed in public, shall unravel many things that will help towards the peaceful and prompt actualisation of Yoruba Nation.

“All of us that you are seeing here today are top-notch professionals. We have medical doctors, lawyers, chartered accountants, engineers, development experts, journalists, academic dons, top bankers and entrepreneurs among us. The majority of us are working at blue-ship public and private organisations,” Simisade Kuku-Onayemi, the worldwide leader of the women, declared.

She said they are contented with what they have but they are not happy with the situation of things in their fatherland hence their coming out to salvage their land in a Yoruba way.

Corroborating her leader, Omowumi Babalola- Okocha said “upon consultations, we were mandated by gods to visit the palaces of Ooni of Ife, Alaafin of Oyo, Osemawe of Ondo, Ewi of Ado-Ekiti, Ayangburen of Ikorodu, Oloffa of Offa, Obaro of Kabba and Awujale of Ijebu Land to carry our some spiritual measures that we cannot mention details in public hence our visit to the Oduduwa Source.

In his brief remarks, Yoruba Leader and Alana of Ilana Omo Oodua, Emeritus Professor Banji Akintoye, who led the women to Ooni’s palace, described the action of the women as a powerful declaration showing the departure of Yoruba land from Nigeria.

The 86-year-old member of the second republic Senate said “our women who gave birth to us have spoken. They have declared and Heaven has heard. What they have started is a powerful declaration showing the departure of the Yoruba Nation from Nigeria.

“It will be amazing and shocking by the time the declaration is made. Yoruba Nation shall be birthed and with the support of our women, our freedom day is nearer,” Akintoye said.

Ooni of Ife in his response to the development, highlighted the importance of women in Yoruba’s strive for freedom, stating that the new twist to the agitation for self-determination is that women are now involved which makes him very glad.

“Whatever you are doing that women are not involved cannot materialise. We are going no where if our women are not carried along and get involved. If you are married, and your wife is not happy with you, it is not going to work well with you unless the woman is not fighting you with sincerity.

“Women are not timid, they are warriors. From the Holy Bible, we read how Deborah fought for her people and conquered. Moremi fought and delivered the people of Ancient Ife from the Igbomekun who were our deadly adversaries. Therefore, women are key to our struggle for self-determination and we must carry them along, going forward.

“We will support our women and we are happy they are taking up the battle and picking up the guanlets. Again, I want to say very expressly that If we fail to have the support of our women folks, we are going nowhere. Therefore, I welcome you to the source and I wish you well in your visit to other palaces in Yoruba Nation”, Ooni declared.

Other dignitaries at the palace during the visit included the National Chairman of Ilana Omo Oodua, Professor Wale Adeniran, University Don, Akin Adejuwon, amongst others. 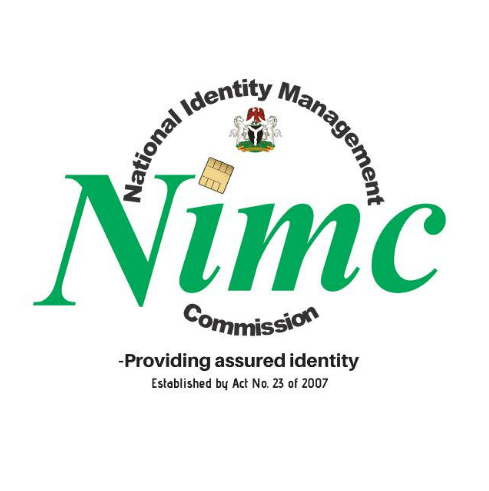 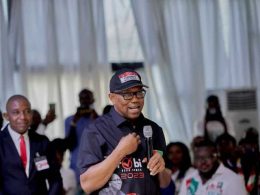 Year in Review: List of Failed Prophecies of 2022 Emerges

x       In December 2021/January 2022, many Nigerian pastors released prophecies about what “God told them”…
byTOPNEWS MEDIA