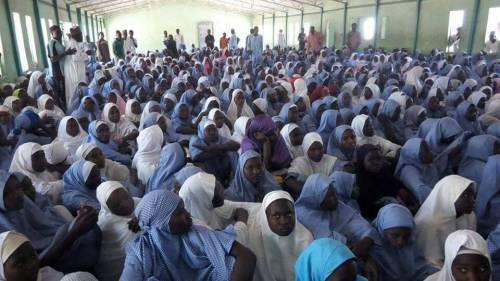 Abduction of schoolchildren is on the rise, and here are eight major cases of kidnapping of pupils and students that have happened in Nigeria;

The abduction of Nigerians by armed gunmen has worsened the problem of insecurity in the country. Though, it happens all over Nigeria, the Northern part of country still remains a hotbed of kidnappings by terrorists and bandits.

While some of the victims of these abductions have lost their lives in the process, many regained their freedom through the intervention of the security agents or the payment of ransoms by family members.

However, abduction of schoolchildren is on the rise, and here are eight major cases of kidnapping of pupils and students that have happened in Nigeria;

276 schoolgirls abducted by Boko Haram in Chibok, Borno in April 2014

On the night of April 14, 2014, when the Senior Secondary Certificate Examination was ongoing, the deadly Boko Haram terrorists invaded Government Girls’ Secondary School in Chibok town of Borno State and kidnapped 247 girls aged 16 to 18 in their dormitories.

The ugly incident was greeted by rage and criticism from local scene and the international community, while some political analysts said it was aimed at bringing down the government of the then President Goodluck Jonathan.

This brought about a movement of #BringBackOurGirls protest in Nigeria spearheaded by a former Education Minister, Oby Ezekwesili. The former first lady of the United States, Michelle Obama supported the movement by tweeting about it.

The Nigerian Armed Forces in their persistent efforts have rescued close to 100 of them. 57 of them escaped immediately after the attack, as they jumped from the trucks conveying them to the terrorist den. And till date, over 100 of the Chibok girls are still missing.

110 schoolgirls kidnapped by Boko Haram in Dapchi, Yobe in February 2018

Boko Haram terrorists carried out their second abduction of schoolgirls in Nigeria on February 19, 2018 in the evening at the Government Girls’ Science and Technical College in Dapchi, Yobe State. They carted away 110 girls between the ages of 11 and 19 around 5:30 pm that day.

The Nigerian government tasked the nation’s security agencies to find the girls. The Nigerian Air Force and Nigeria Army deployed their men to search for them, but all to no avail.

However, the terrorist group released 104 girls in March of that same year after a purported negotiation was reached with the Nigerian government. There were reports that five of them died on the day of the abduction. One girl, Leah Sharibu was not released by Boko Haram under the claims that she refused to renounce her Christian faith.

Over 300 schoolboys abducted in Kankara, Katsina in December 2020

A gang of gunmen suspected to be bandits with links to Boko Haram terrorists attacked the Government Science Secondary School, Kankara in Katsina State to Abduct over 300 boys on December 11, 2020. Though, there was an audiotape by the leader of Boko Haram, Abubakar Shekau claiming the responsibility for the abduction, the Minister of Information, Lai Mohammed said the abductors were bandits.

There were deployments of security operatives in search of the boys in the state and the neighbouring states. There was heavy criticism of President Muhammadu Buhari who was on an official annual leave in his hometown, Daura during the incident and did not visit the school or attend to the mourning and aggrieved parents of the boys at that time.

On December 17, Katsina State Governor, Aminu Masari announced that 344 of the boys had been freed from where they were held captive in the forest in Zamfara State.

Two months after Kankara boys regained freedom, gunmen stormed another Government Science College in Kagara, Niger State and abducted 27 schoolchildren.
One was killed in the attack.

In the attack that happened around 2:00am, three members of staff and their 12 relatives were also abducted by these armed criminals suspected to be bandits on 17th February, 2021.

While the President asked the security agents to rescue them, the Governor of Niger State, Abubakar Sani Bello said his government was negotiating with the bandits to release the victims.

It was on 27th February, that the government of Niger State announced the bandits had released all 42 hostages.

In similar versions of Chibok and Dapchi abductions, a group of armed bandits raided another Government Girls’ Science Secondary School in Jangebe and whisked away 279 schoolgirls between the ages of 10 and 19 on 26th February, 2021.

The hostages, however, barely spent five days in the den of their abductors as all of them were released on March 2, after negotiation was reportedly brokered between the Zamfara Governor, Bello Matawale and the bandits.

The gunmen upgraded their modus operandi by staging an abduction at a higher institution of learning, when they attacked the Federal College of Forestry Mechanization, Afaka in Kaduna State and kidnapped 39 students. There were 16 males and 23 females taken as hostages in the attack that happened around 9:30pm that day.

Sources revealed that the victims would have been more than that had it not been that military men engaged the armed bandits in a gun battle, when a distress call was made to the Nigerian Army, as the college is located near the Nigerian Defence Academy military barracks.

Five of them were released on April 5 and another five on April 10, as the Kaduna State Governor, Nasir El-Rufai reiterated that his administration would not negotiate with the gunmen to release the students.

However, the remaining 29 students regained freedom when they were released on May 5, 2021, following a negotiation that was believed to have taken place as spearheaded by a controversial Islamic cleric, Ahmad Gumi and others.

The second kidnapping of tertiary students in Northern Nigeria occurred on April 20, 2021 when unknown gunmen invaded Greenfield University in Kasarami village, Kaduna State and abducted about 21 students and two members of staff of the institution.

After taken hostages to their den, on April 23, the kidnappers killed 3 students and dumped their corpses at Kwanan Bature village, a location close to the university. Three days later, they killed two more students as they demanded N800 million as a ransom.

May 1 witnessed the release of one of the kidnapped students by the bandits after there were reports that his parents had paid an undisclosed amount of ransom.

On 29th May, 2021, the remaining 14 students and the workers regained freedom, following provision of N150 million and 8 new motorcycles as a ransom by their relatives to their abductors.

200 Islamic students kidnapped in Tegina, Niger in May 2021

The latest abduction of schoolchildren was on Sunday 30, 2021 when armed militants suspected to be bandits invaded Salihu Tanko Islamic School in Rafi community, in Niger State.

A video revealed how scores of people were running helter-skelter on the Tegina-Zugero highway in Niger State, during the assault.

The kidnappers on Tuesday contacted the school and demanded N110 million to release 156 students. They claimed were with them.
The state government has however said it will not pay any random to bandits.