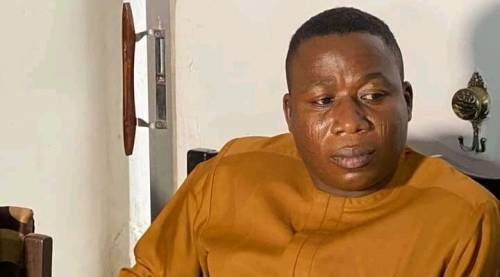 Alajashe of Ajashe from Port Novo, and his counterpart from Seme are said to be at the meeting.

Yoruba monarchs, whose territories are in the Republic of Benin are currently meeting to discuss the arrest and prosecution of the embattled Yoruba Nation agitator, Sunday Adeyemo aka Sunday Igboho.

The monarch and their chiefs are reportedly seeking ways to help Igboho, who is being detained in the francophone country following his arrest at the Cadjèhoun Airport in Cotonou by the International Criminal Police Organisation.

Two of the monarchs, Alajashe of Ajashe from Port Novo, alongside his counterpart from Seme are said to be at the meeting taking place at the palace of Alajohoun of Adjohoun.

Igboho has been held in Benin for nearly a week, and the court of appeal sitting in Cotonou will continue hearing the case by the Federal Government of Nigeria against him on Monday, July 26, 2021.

Meanwhile, his lawyers are optimistic that extraditing the Yoruba Nation agitator to Nigeria would be difficult because there is no extradition treaty between Nigeria and the Republic of Benin.

One of the lawyers, Ibrahim Salami, who believes it’s better for Igboho to be killed in Benin than hand him over to the Nigerian government expressed hope that a verdict would be gotten when Igboho appears in court on Monday.