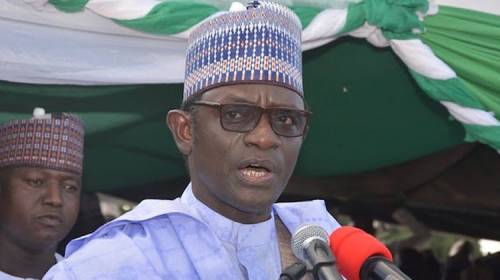 According to the form submitted on May 23, 2019, and exclusively obtained by Topnewstv, Buni acquired different buildings in Abuja, Kano, Borno, Kaduna and Yobe states valued at N3.1 billion between 2015 and 2019 while serving as the National Secretary of the APC.

Yawning gaps have been discovered in the assets’ declaration form submitted by the Yobe State Governor and Caretaker Committee Chairman of the ruling All Progressives Congress APC, Mai Mala Buni, to the Code of Conduct Bureau (CCB).

According to the form submitted on May 23, 2019, and exclusively obtained by Topnewstv, Buni acquired different buildings in Abuja, Kano, Borno, Kaduna and Yobe states valued at N3.1 billion between 2015 and 2019 while serving as the National Secretary of the APC.

According to the assets’ form, the governor declared ownership of a five-bedroom duplex at Tafawa Balewa way, Kaduna State, which he bought for N75million on August 15, 2018. Buni also said he has another five-bedroom flat he bought for N60million in 2016 at Court Road, Grace Yard, Karu Abuja.

Also listed by the governor was a six-bedroom duplex with conference room bought at N150million in 2019. The building is located at 146, Cadastaral, Zone A03, Garki, Abuja.

He owns another five-bedroom duplex at No 101, Kwakwasiya Housing Estate, Kano. This, he informed the CCB, was purchased for N37.447million.

The governor further declared ownership of a four-bedroom duplex at No 11, Chartown Street, Wuse Zone 5, Abuja which he bought for N150million in 2018.

Buni, a man without known business except being a politician owns a 3 floors and penthouse located at No 22, Asika Street, Asokoro, Abuja. This, he informed the CCB, was purchased on 6th of December, 2016 for N1.3billion.

Another four bedroom duplex was also acquired by the governor in 2015 for N55million.

The APC Caretaker Chairman also declared ownership of two filling stations in Maiduguri he bought in 2018 at N280million. A 3-bedroom flat behind the School of Health in Maiduguri which cost him N25million in 2016 was also listed as part of his property.

Buni also bought a landed property located at 151, Cadastral, Zone D in Abuja at N700million. This, he informed the CCB, was purchased in 2016.

The governor also listed other property he got at N2million, N5 million, N8 million, N10million N20million each respectively in Damaturu, Maiduguri, Kano and Abuja.

The property, he also claimed at the time, yielded no income in rent yearly.

Buni also told the CCB he had millions of naira in 8 other bank accounts.

He also claimed to own over 20 vehicles worth millions of naira he raised through personal savings/loan and the helping hands of friends.

A source at the CCB had earlier told Topnewstv that investigation into what he described as the governor’s anticipatory declaration had gone far at the agency.

Topnewstv had on Monday exclusively reported how spirited efforts by the governor and his backers to cover up the scandal failed last week when his pre-tenure form (form CC81) which was deposited at CCB on May 23, 2019 got leaked to President Muhammadu Buhari, the Department of State Security Services and the National Intelligence Agency.

“Though he has immunity but he committed offences contrary to Section 15 of the Code of Conduct Bureau and Tribunal Act, Cap C15 Laws of the Federation of Nigeria 2004 which are punishable under Section 23 (2) of the same Act,” a government house source had told Topnewstv.

An analysis of the document submitted by the governor showed that He declared having N2billion as cash in six Nigerian banks.

Further checks showed that the accounts are being operated by one firm, MDG construction and general company limited.

Buni, in the document, however, claimed to have no cash in foreign accounts.

Despite claiming his two main source of income were farming and business, a closer look at the document revealed that the governor declared 25 buildings in Abuja, Kano and Yobe states valued at N3.1billion.