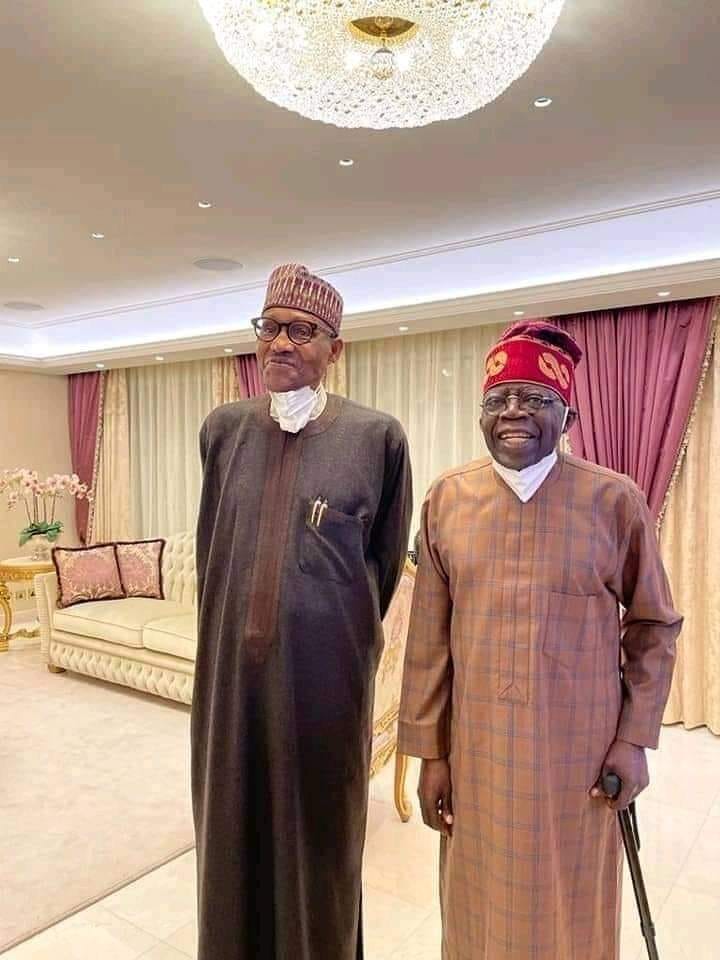 The APC chieftain, it had been learnt, left the US for the United Kingdom on crutches, a few days after the surgery.

President Muhammadu Buhari has visited the National Leader of the All Progressives Congress (APC) and former Lagos State Governor, Bola Tinubu, in London, the United Kingdom, where he is currently relaxing after undergoing a second surgery in one month.

Tinubu was seen with a walking stick during Buhari’s visit, confirming Topnewstv’ story that he underwent a second surgery in the United States.

Topnewstv had on Monday reported that Tinubu underwent a knee surgery at the John Hopkins University Hospital in Maryland, US.

The APC chieftain, it had been learnt, left the US for the United Kingdom on crutches, a few days after the surgery.

On Thursday, Tinubu visited Buhari leaning on a walking stick.

“You see he couldn’t hide that he had difficulty walking after undergoing his second surgery. He went to UK on crutches but took a walking stick to see Buhari,” a source revealed.

Topnewstv had also reported that sources close to Tinubu said he wanted the surgery in Paris, France but changed his plan over rumours of his death.

“Tinubu had his second surgery at John Hopkins University in Maryland recently. He was accompanied by a popular Nigerian doctor in Chicago. He had wanted the surgery in Paris but when rumour was rife about his death, he hurriedly left for Nigeria and went to John Hopkins,” one of the sources had said.

“He left the US for the UK on crutches,” another source revealed.

Topnewstv had on July 31 reported that Tinubu, who has had several medical trips this year alone, had a surgery about two weeks earlier and could be billed for another one.

The APC National Leader has been off official and party functions in the country for a while, amidst talks that he is being positioned for the 2023 presidency to succeed the incumbent repressive regime of Muhammadu Buhari.

“He had a surgery last week,” an authoritative source had disclosed.

A few days after the story, photographs of Tinubu hosting Governor Babajide Sanwo-Olu of Lagos state in London surfaced where the duo were seen together in a room.

Reports have it that the meeting was held to put an end to speculations surrounding the APC National Leader’s health status.

In January 2021, Tinubu was also reported sick and hospitalised in Paris, France.

Tinubu had earlier complained of exhaustion and travelled out to rest before the news of his collapse went viral.

He was flown to Paris for medical attention in the first week of January.

Topnewstvhad on June 15 reported that Tinubu was also in Paris, battling some old age ailment.

“Tinubu is in Paris, France for a medical checkup. His health is deteriorating. Old age and other stuff, but he still wants to be president. This could mean another medical tourism presidency for our country,” a top source had at that time revealed.

Topnewstv had reported the conspicuous absence of Tinubu during the one-day working visit of President Buhari to inaugurate various projects in Lagos State.

Earlier, the President’s spokesman, Garba Shehu, had tried to downplay the obvious rift between the two leaders and their camps, saying the interview the President granted to Arise Interview where he mentioned Lagos was not about Buhari.

“You cannot sit there in Lagos, for instance, and decide on the fate of APC on zoning,” Buhari had said while responding to a question during the interview.

“The hope of this administration is to see APC last beyond it. Therefore we should allow the party to decide. The restructuring of the party has begun from the bottom to the top with the membership card registration. Every member of the party must be involved. We will soon conduct our convention. No single member of the party will be allowed to go against the wish of the party.”

Shehu had maintained that there was no rift between the two leaders and the reference to Lagos was not to Tinubu.