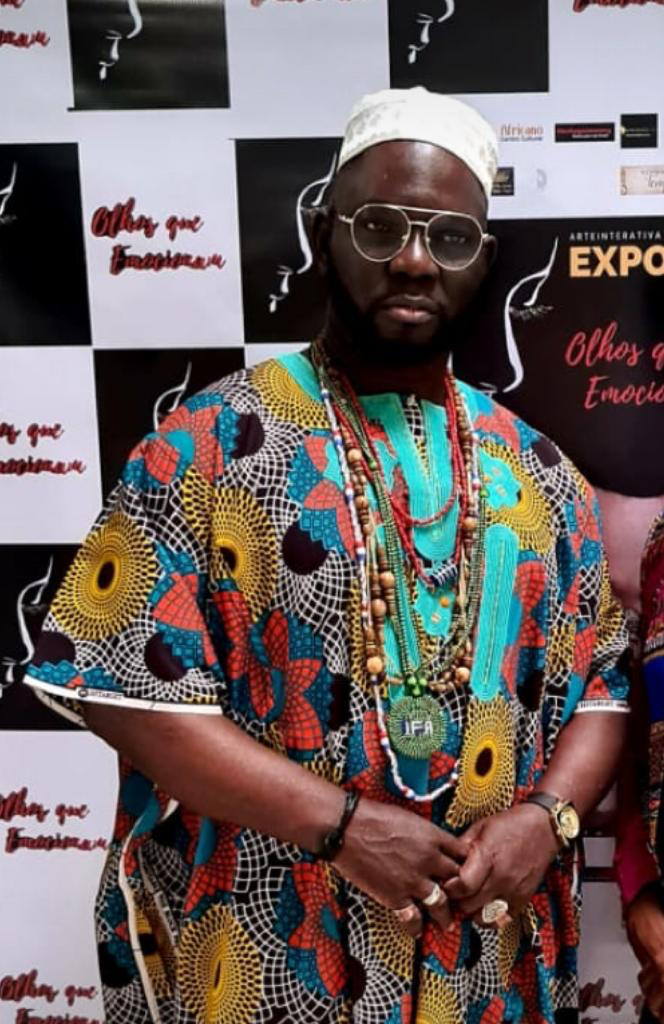 Esan , in Yoruba , is a strong word. a symbolic significance . Esan means  vengeance , it could also be the wages of sin , the reaction to actions; the answer to every question . Esan makes you reap what you sow , it stands as a word that represents justice . Esan responds to every situation.

Esan is not a deity , neither is it a person , Esan is the force of a word , the word that puts fear on every human. Only the right doing ones escapes the wraths of Esan

Esan is the truth of all situations , it represents the active quality of Olodumare, Esan acts accordingly; keeps the hope of the oppressed .

In the Yoruba tradition of Ifa , Esan is attached to the in-depth areas of the Ifa literary corpus . Esan calls for a just society .

In this regard , Esan ake l’ori Osika , a mixed media painting by Adeyinka Olaiya, a Brazil based Nigerian-Yoruba artist and writer, has attracted art collectors as one of the most philosophical artistic expressions of the moment in Brazil , it has captured the interest of notable local and international Art collectors , they all want to add the Obra mestre to their collections

According to Olaiya’s  definition of ESAN , the artist who gave the definition of Esan said that human being will always be subjected to his or her handworks , he said Esan is the shadow that follows you around , it is the word that makes judgement at the right time and when necessary, Adeyinka Olaiya said his paintings are reflections of the Yoruba philosophies , that is why he explains the different areas of Ifa verses in his expressions .

According to Olaiya, his paintings are philosophical , it’s the retracts of the Yoruba divinity, he said the painting “ Esan “ has since been sold to a Brazilian collector, and at an undisclosed price.

Vast in the Yoruba Ifa tradition , Adeyinka Olaiya speaks with his colors and textures , he applies traditional objects of importance as relieves in his paintings. He transmits the visual concepts of the Yoruba divinity using colors , objects and expressions. Adeyinka Olaiya is based in Brazil