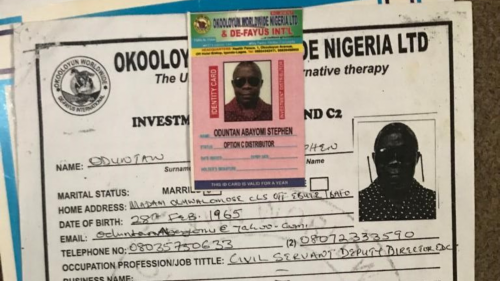 Oduntan, who invested N2.5million into the company on April 29, 2019 under its ‘Option ‘C’ Empowerment’ scheme, disclosed that the management of Oko Oloyun had been giving various excuses each time he visited their office at Igando in Lagos to ask for his money.

A 56-year-old visually impaired man living in Lagos State, Abayomi Oduntan, has cried out over the refusal of an herbal medicine company, Oko Oloyun, to pay more than N5million owed him.
Oduntan, who invested N2.5million into the company on April 29, 2019 under its ‘Option ‘C’ Empowerment’ scheme, disclosed that the management of Oko Oloyun had been giving various excuses each time he visited their office at Igando in Lagos to ask for his money.

According to him, the company was supposed to pay him and other investors the sum of N250,000 every two months as returns on their investment.

He said that since he invested his money with Oko Oloyun in March 2019, he only received payment twice from them.

He revealed further that the late founder of the company, Fatai Yusuf, sent a message out to them shortly after the second payment to say interests pegged at 30 per cent would be remitted twice in a year into their accounts to enable investors receive returns in bulk.

Yusuf also promised to pay all outstanding interests at the time in early 2020.

Oduntan said that he and others, who also plugged funds into the company’s operations, were waiting for that to happen when Yusuf was shot dead on January 23, 2020, in Oyo State.

Despite the company still operating optimally, Oduntan said the management of Oko Oloyun has refused to pay his initial capital invested into the herbal medicine firm and the returns on investment that altogether accrued to more than N5million.

He said, “They treat me like a nonentity each time I visit their office to ask for my money. I am asking for what rightfully belongs to me, is this too much?

“It has been over one year since the owner of the company died and the management has refused to pay our money despite using it for business.

“They are still operating at full capacity but I cannot tell why they have refused to pay what we are entitled to according to the terms of the agreement we have with them.

“There are hundreds of people also affected by this corrupt act by the company. A lot of people have been crying in silence but I will not allow them to silence me because I am only asking for what belongs to me.”

The two official telephone lines of the herbal medicine company were switched off when SaharaReporters made contact on Monday to seek the management’s reaction to the issue.
Text messages sent to both lines had yet to be responded to as of the time of this report.