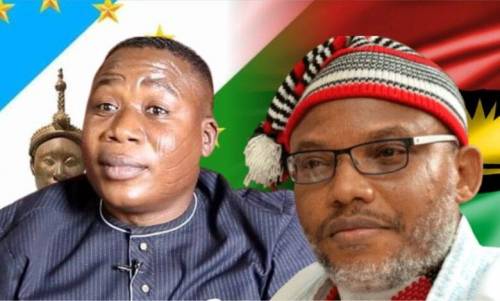 One of the activist’s counsel said the chances of getting Igboho out of prison in 2021 is very slim.

As the year gradually runs to an end, from all indications, the leader of the Indigenous People of Biafra (IPOB), Nnamdi Kanu and Yoruba Nation activist, Sunday Adeyemo, aka Sunday Igboho will spend the festive season in jail, barring any last-minute development.

Aloy Ejimakor, special counsel for Kanu on Friday told SaharaReporters it was his wish that his client does not spend Christmas in the custody of the Department of State Services (DSS), but added that there is no court case again this year.

The lawyer said he was waiting for Abia State High Court to fix a date to continue hearing of Kanu’s case. A lawsuit demanding Kanu’s fundamental human rights had been instituted at the court.

Justice Benson Anya of the Abia court had said in the last court proceedings on December 10 that the parties will receive notice on the date the court will render its judgment.

Kanu is facing charges of treasonable felony levelled against him by the Nigerian government, but Justice Binta Nyako of the Federal High Court, Abuja, had adjourned his case till next year, January 18.

Ejimakor said, “It is my hope as his lawyer that he will not spend Christmas in detention, but we don’t have any court case this year again.

“The Abuja case is next year January 18, while the Umuahia has been concluded but we have to wait for when they will call us for judgment.”

Similarly, Igboho, who was arrested by the Republic of Benin authorities at the Cotonou Airport on July 19, 2021, has since been in a detention facility in the neighbouring country.

Speaking with SaharaReporters on Thursday, Pelumi Olajengbesi, one of the activist’s counsel said the chances of getting Igboho out of prison in 2021 is very slim.

He, however, does not rule out the possibility of Igboho’s release as he added that efforts were being made to secure his release.

“Frankly, the hope of getting him released this year is still very slim. There are diplomatic consultations going on in respect of that because as you know, Igboho in the eyes of the law is a very free person, he has committed no crime.

“We know he’s being held against his will. He’s a prisoner of conscience and so we believe that he will be out soon but I can’t guarantee he will be out before the end of this year. There are lots of diplomatic discussions going on in that regard.”

Concerning the health of the agitator which had sometime ago been reportedly failing, Olanengbesi stated, “I can tell you right now that Chief Sunday Igboho is hale and hearty, very motivated, a very strong person. If you know him very closely, you will know he is a very courageous person. We continue to pray that God gives him more strength to remain focused.”

Topnewstv had earlier reported efforts made by some major pro-Yoruba bodies to get Igboho out of jail, including holding protests to register their displeasure at his continued detention.

In November, Yoruba self-determination group, Ilana Omo Oodua announced that it had begun the movement to secure the release of Igboho.

The group disclosed this during the inauguration of its Elders Advisory Council in Ibadan.

Earlier this month, members of the Agbekoya Solidarity Movement of Nigeria, representing the interest of farmers in Ibadan, Oyo State, took to the streets to call for the immediate release of the activist.

The protesters started the protest from Mapo Hall in Ibadan, carrying placards boldly demanding the release of Igboho who they claimed was fighting for their rights.

The group had approached the palace of the Olubadan of Ibadan, Oba Saliu Adetunji, with a letter stating their demands.

They requested that the king present the letter to President Muhammadu Buhari on their behalf.

Dawodu, in a statement, warned that the Beninese government must ensure the adequate release of the activist within seven days or “face serious consequences of the nature of an economic embargo that as a country, it may never recover from, in a very long time.”