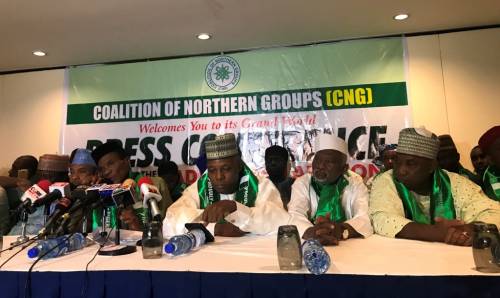 The states in the North-West geopolitical zone are Jigawa, Kaduna, Kano, Katsina, Kebbi, Sokoto and Zamfara.

The Sokoto State chapter of the Coalition of Northern Groups (CNG) has given the Nigerian Government three months to curb insecurity in the North-West states or face a mass action that will shut down the zone and the Federal Capital Territory, Abuja.

The states in the North-West geopolitical zone are Jigawa, Kaduna, Kano, Katsina, Kebbi, Sokoto and Zamfara.

The threat was contained in a communique issued at the end of a one-day stakeholders’ meeting in Sokoto on Thursday.

According to the group, it had mobilised youths in all the northwestern states to ground activities in the zone until the government curbs the problem of banditry and other violent crimes in the region.

Just last Monday, 23 travellers were killed by bandits in Sokoto, a situation that has since sparked public outcry and protests, especially after President Muhammadu Buhari attended a book launch in Lagos the same week.

Coordinator of CNG in the state, Isah Jabbi Usman, who accused the outlawed volunteer vigilantes group, known as Yan Sakai of escalating violence in most parts of the northwestern states, especially in Sokoto, called for an immediate solution to the problem of insecurity.

The group faulted federal and state governments for not doing enough to curb the problem of banditry at its budding stage.

‘’We hereby place the authorities on notice that if the killings and abductions are not significantly or totally controlled within the next three months, mass action would be called that will not prelude occupying all towns in all the frontline states and the Federal Capital Territory, FCT, Abuja,’’ Usman said.

Directors of the Department of State Services (DSS) drawn from the North-West geopolitical zone had in June brainstormed in Kaduna to reverse the troubling spate of insecurity occasioned by kidnapping, banditry and other related crimes in the zone.

The meeting which was described as the 2nd quarterly meeting of the secret police held in the DSS office complex located along Maj. Gen. Muhammadu Buhari Way (formerly WAFF road), Kaduna.

All the Directors of the agency from Kebbi, Kano, Kaduna, Jigawa, Katsina, Sokoto and Zamfara states were present at the meeting.

Others in attendance were heads of security agencies from the Army, Nigerian Air Force, Federal Road Safety Corps, the state Commissioner of Police, and representatives of the Nigeria Security and Civil Defence Corps, Nigeria Customs Service, among other paramilitary agencies.

Kaduna State Governor, Nasir El-Rufai, who declared the meeting open, noted that his administration’s priority is to keep the state safe from any form of security threats.

According to him, the state government will continue to invest in advanced technology like drones to confront bandits across the state.

“We have invested in drones, and we are investing in more drones, working with the Air Force and the SSS (State Security Service) to see that these drones are deployed to provide additional intelligence. We are also building a forensic laboratory, to help the Police and other security agencies in crime detection and prevention,” he said.